Sometimes, women don’t want kids. That’s the tension at the heart of Huesera, the feature debut of director and co-writer Michelle Garza Cervera.

Huesera follows Valeria (Natalia Solián), whose initial joy at becoming pregnant soon gives way to creeping doubt and dread. A spider-like presence is plaguing her at night, while encounters with her spinster aunt and punk ex leave her questioning the path she’s chosen to travel. Is this really what she wants to do with her life, or is she caving to what others want for her?

To talk about the film, we caught up with Cervera at Fantastic Fest 2022. Here’s what she had to say.

SCREAM: You mentioned that you met your co-writer, Abia Castillo, on a bus. How did the conversation to make this film come about?

MICHELLE GARZA CERVERA: Well, it was funny. It was work travel; we were working at the same, boring company doing video mapping. We’d never hung out before in the office, but we were sat together, and the lock screen on my phone was from Love and Rockets, the comic book. She was like, “No way, you like Love and Rockets! It’s my favourite comic!” It’s my favourite comic, too. And we immediately started talking.

We were sharing a room as well because we were the only two women going on the trip. I started talking to her about Huesera—back then it was just a ten-pager—and she had very good notes about it, many cool ideas immediately. I was clear: I wanted to write with her, and I invited her to the project.

At the heart of the film, there’s a deep anxiety around feeling that you need to settle down, have children, and embrace domestic life, and I think that’s especially complicated for queer women. Did you know from the start that you wanted Valeria to be a queer woman?

Yes, of course. What we wanted to challenge was the status quo, the classic idea of the nuclear family. Queerness really embraces that there are other ways to live that might not even have a name, and that’s the radical part of it. A certain box or imposition goes away. So that, combined with the punk elements of Valeria’s life, was very important because it needed to represent the challenge to the status quo that she has subscribed to without thinking about what she really wanted.

What did your actress say when you asked her to shave her head for the punk scenes?

I love this question because people really think it’s the same actress [who plays the younger version of Valeria]. It’s another actress—her name is Gabby [Velarde] and even Natalia was like, “Oh my god, you need to pick Gabby, we really look alike!”

The symbolism behind the shaved head was important. At first, she was struggling and I was like, “I’m so sorry! If you don’t want to…” But then she loved it! She looks so cool and she took so many pictures. But making that kind of decision for a film can always be very tough for actors.

Spiders and webs are a big motif in the film. How did the idea to use that motif come about and how did you approach weaving it throughout the tale?

We got to a point in the writing where we understood that the two most important aspects of Huesera were the bone cracking and the spiders and webs. One big influence was the sculptures of Louise Bourgeois, the French sculptor who made this huge spider. That spider is called Maman, and she’s basically speaking about her mother. She speaks a lot about the aspect of motherhood being a jail and also a home, with the spider being a weaver to protect, but also a predator. The work of that artist was very inspiring for the concept of Huesera.

It was really all around the film: within the lighting, the production design, the costume design, Valeria’s work as a carpenter. With the furniture she’s weaving, she’s putting herself into jail. Sometimes, we do that to ourselves. That’s why the idea of spiders was perfect for the concept of domesticity we built into the film.

There’s one scene that really stood out to me, where a dinner guest says that another woman lacked passion for dropping out of the orchestra after practices ran late, when in fact she was frightened of walking home at night. Can you talk a little about this underlying theme of people, including other women, not understanding and supporting women’s choices?

For us, it was very important to show a palette of differences to challenge the dichotomy of being a bad woman or a good mother. One of the characters in the palette is this woman who is very privileged to be able to say, “Oh, she’s not as passionate as me.”

We also have the theme of class distinctions in Mexico City, and this was a good moment to say that there are many women without privilege in the same city that can’t embrace being passionate and fully into something they love, because they don’t have access to that. And in a certain way, that’s part of what Valeria is losing as well. She’s losing her passions. 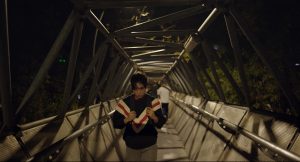 You also have repeated scenes of Valeria walking home across a bridge at night with men walking toward her, and it’s always tense to watch that as a woman.

That was very intentional. All of us have experienced the constant suspense of walking at night and thinking “something’s going to happen here…” You can be going through a horrible, difficult moment in your life, but then you also have this violence that’s kind of normalised all the time. It defines our lives and the way we transport ourselves.

Absolutely. So, what’s next for you after Huesera?

When we were writing Huesera, Abia and myself were scared we were not going to get the funds for it, because it was big for a first feature. So around the same time, we were writing another project which is more like a sci-fi horror. It’s the story of a grandmother and her granddaughter in a small town in Campeche, where my grandparents were from. We just won the funds for that one, so we’re re-writing at the moment and we’re going to film it in the first months of next year.

We’re also doing an adaptation of a short story by Mariana Enríquez, a writer from Argentina, which is amazing. That’s a feature too and we won a scholarship to write it from the Mexican Film Institute. I also just directed some episodes for a TV show that is more a thriller, and we’re doing another show that we wrote together that is kind of like The Twilight Zone, but one that happened in Mexico in the 90s.

Huesera is set to be released theatrically in the U.S. by XYZ Films.