The only glimpses of Michael Myers as he appears in David Gordon Green’s upcoming Halloween sequel/reboot have come courtesy of a couple of promo shots with Jamie Lee Curtis. That changes now though, with the reveal of the film’s first official poster!

Myers’ iconic mask looks pretty ravaged on the poster. Clearly, the years since he sliced and diced his way around Haddonfield back in 1978 have been kinder to Curtis’ Laurie Strode than they have to him. 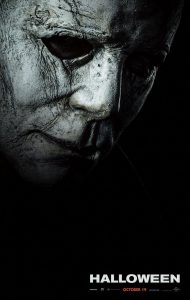 Heading our way in October, the hotly anticipated film sees Curtis return as Laurie, with Judy Greer as Laurie’s daughter Karen, and Andi Matichak as granddaughter, Allyson. Nick Castle – one of two actors to play Michael Myers (then credited as ‘The Shape’) in the original film, not to mention the writer of Carpenter’s Escape from New York – will once again don that famous mask, again sharing the role, this time with actor and stunt performer James Jude Courtney.