The Method is an unconventional couples therapy retreat that Frank and Linda hear about from some friends who attended. The treatment saved their relationship. Frank and Linda decide this might be what they need to reconnect and save their marriage. The treatment is expensive and as it turns out, not just financially so.

The setting is a remote lodge in the middle of the Montana wilderness. Surrounded by forests and a lake, it’s isolated and picturesque. Phones and other distractions are taken away for the weekend so they can focus on themselves and each other. A walk in the woods changes everything for the couple. A murder and the arrival of local militia put them in a desperate battle for survival, and they are forced to trust and rely on each other.

Much of the book focuses on the failing relationship of Frank and Linda, so we get to know a good deal about them and have insight into their troubles. They truly are taking the last step before breaking up. The author gives us a relationship that feels real and characters that we empathise with and care about. There is one other couple attending The Method who are a little off. As the reader, you’re questioning whether they are part of The Method or not.

The book starts with a bang and then we’re taken back to preceding events. This is a great hook to draw you in. The story builds steadily and really picks up to a breakneck pace for the final third. We’re sold a few red herrings along the way – what you expect the focus of the book to be shifts into something quite different. 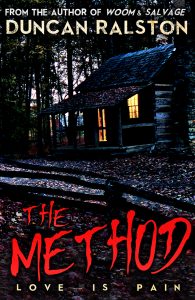 The militia antagonists are particularly relevant today with nationalism, localism, and government mistrust rampant. Sarge, the leader of the militia, offers more of a character than the brutes who follow his lead. They fall into more of the hillbilly lunatic stereotype. Unfortunately for Frank and Linda, a one armed militia man named Colby is one of the lunatics. He’s violent, sadistic and, fair warning, we do see a significant torture situation.

The climax of the story is gripping and once again, expectations are flipped. This is a book that would be hurt by spoilers so I’m not going to go into further detail. What really makes the book is the strong characterisations, and Duncan Ralston shows us that as the cover states, Love is Pain.