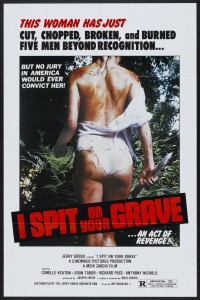 That’s right; the original director of the original I Spit on Your Grave has made a direct sequel to his film from 1978. He kept that one a bit quiet didn’t he? Perhaps he’s displeased with the route the remake and its sequels have taken, and who could blame him? Despite not being complete tosh, they cannot compete with the brutality and shock present within the revenge-driven original film.

This direct sequel will see Camille Keaton reprise her role as Jennifer Hills 37 years after her vicious rape. She will be joined by a host of new characters that include the wives and sons of the men she took revenge on all those years ago. The cast includes Maria Olsen, Jim Tavare, Jonathan Peacy, Jeremy Ferdman, Holgie Forrester, Roy Allen and Alexandra Kenworthy.

Synopsis:
Following her brutal rape, Jennifer wrote a best-selling account of her ordeal and of the controversial trial in which she was accused of taking the law into her own hands and ruthlessly killing her assailants. In the small town where the rape and revenge took place, the relatives of the four rapists she killed are furious that the court declared her not guilty and resolve to take justice into their own hands.

We’re unsure how morally sound this all is, with the idea of the rapists’ family taking revenge a little bit hard to swallow. Hopefully we’ll see Jennifer’s daughter taking things in to her own hands and finishing off where her mother started. Whatever happens, in Zarchi we trust and it will certainly be interesting to see this all come together. I Spit On Your Grave 2: Déjà vu is currently in post-production so we could be seeing a release date as early as next year.