With the fifth and final season of A&E’s Bates Motel steadily creeping up on us, the macabre saga of Norman Bates is getting ever closer to the events of Alfred Hitchcock’s Psycho (albeit in a re-imagined, modern setting). We found out a while ago that Rihanna was to follow in Janet Leigh’s doomed footsteps as Marion Crane and now, thanks to Entertainment Weekly, we have our first look at the Grammy-winning singer in the role.

Executive producer Kerry Ehrin told EW:
“Norman is in an incredibly intense and interesting place that we’ve built him to when that sequence of episodes starts. It’s this collision of Bates Motel storytelling and then Marion Crane showing up into that. He’s in a very fragile and lonely place, and Marion Crane is a charismatic woman, she’s super present when she’s with him and she’s very attractive — all those things are exactly what he needs right at this moment.” 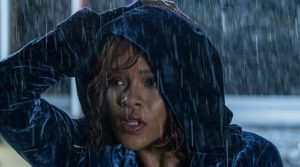 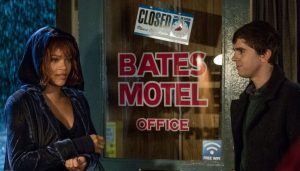 Season 5 picks up two years after the methodically executed act of matricide that concluded the show’s fourth season and sees Freddie Highmore’s Norman now living a double life. Known to his neighbours as a friendly and well-adjusted member of the White Pine Bay community, Norman’s psychosis is in full swing behind closed doors. His violent blackouts continue, while his Mother Norma (Vera Farmiga) has no less influence over his mind despite being dead. Meanwhile, Dylan Massett (Max Thierot) and Emma Decody (Olivia Cooke), unaware of the events of two years previous, soon find themselves again faced with Norman’s insanity, while a vengeful Alex Romero (Nestor Carbonell) plots to kill his stepson and avenge the murder of his one true love, Norma Bates.