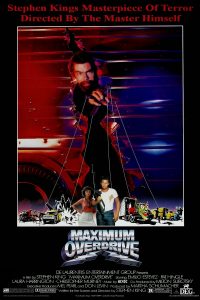 Synopsis:
A small town in North Carolina is experiencing some strange events. Machines begin to come to life and turn on human beings. A group of trucks come to life and surround a gas station, forcing a small group of survivors to band together.

Theatregoers in 1986 may have noticed the trailer for Maximum Overdrive, the directorial debut of Stephen King. It was notable for the author staring right into the camera and proclaiming, “I’m going to scare the hell out of you.” Although many adaptations of King’s work have been made, this would mark the only time that the author at the helm. Maximum Overdrive is a combination of inconsistencies, familiar clichés, and content that’s utterly ridiculous. Although King now regards it as the worst depiction of his work, its appeal as an enjoyably bad movie has maintained through the years.

Maximum Overdrive is the quintessential product of its time. Arriving in the middle of a decade fuelled by excess and cold war paranoia, and accompanied by a soundtrack from hard rock legends AC/DC. While the story of machines rebelling against their masters is an intriguing one, it’s also fraught with elements that don’t seem to properly add up. Much of its first act is full of inanimate objects springing to life, and partaking in unadulterated homicidal rage. Everything from arcade games, coke machines, steamrollers, and even a lawn mower embark on some of the most nonsensical rampages ever conceived. King himself makes a cameo as a dissatisfied bank customer, whose financial transaction is cut short due to an ungrateful ATM.

The bulk of the story focuses on a group of survivors at a gas station. As recently animated trucks lay siege to them, they’re forced to work together in order to survive. At first glance, this is a set up that seems all too familiar. It’s utilised in many movies that deal with a zombie apocalypse. (IE: Ordinary people in an isolated location dealing with an inexplicable situation around them.) Films such as Night of the Living Dead used this to illustrate how different people react during a crisis. It almost feels that King is not only aware of this cliché, but actively parodying it. The human characters feel like over exaggerated stereotypes typically found in the horror film. Expanding upon the zombie parody are the undead being replaced with vehicles brought to life, and their compulsory need to sustain themselves by feeding. In this case, it’s their demand for gasoline from the station. 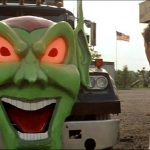 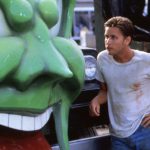 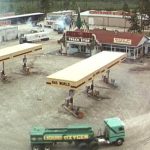 The events that take place at the gas station are riddled with inconsistencies, some of which are impossible to ignore. As the survivors scramble to defend themselves, they discover a small arsenal of weapons conveniently hidden in the basement. Although its placement is easy to overlook as a plot convenience, there’s a gaping hole in the story—the weapons don’t come to life. One of the trucks encircling them is an old army vehicle, fully equipped with a machine gun that fires rounds off with impunity. For the sake of argument, it seems not all the machines are affected by the mechanical uprising. In another inconsistency, two newlyweds are chased on the highway by another truck that’s been given the gift of life. Remarkably, their car is also completely unaffected.

Maximum Overdrive requires suspension of disbelief to enjoy. It’s a hair-brained scheme of an endeavour, and one that still manages to be entertaining despite its flaws, and isn’t hindered by them. King might have progressed as a director, had he continued making films. As far as his proclamation of scaring the hell out of us: we might not be frightened by his efforts, but we are amused.