ME & MY MATES VS. THE ZOMBIE APOCALYPSE 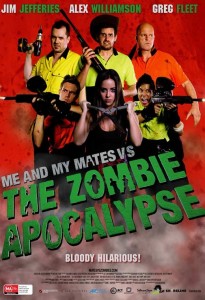 Synopsis:
Taking a breezy attitude towards a widespread viral outbreak, friends Darryl and Joel take refuge in a telephone exchange. They are soon joined by Roy and his daughter Emma, her boyfriend Lachlan and his mate Ryan. Surrounded by a zombie horde, the group formulates plans for escape, and for their future.

Numbed by the lumbering horde of sub-par zombie flicks the last few years have brought, a default reaction of either indifference or outright cynicism to each new, invariably straight-to-disc arrival (especially one with a comedy title, and especially when said title contains a ‘Vs’) is entirely understandable. Australian low-budgeter Me and my Mates Vs. the Zombie Apocalypse does well to quash such expectations early on then, with a smirk-inducing opening that sees likeable loser Darryl stealing a grenade, a ride-on lawnmower and some juice and taking – slowly – to the road.

From here on in, the laughs hit the mark for the most part, although Joel’s (comedian Jim Jefferies) laddishness and casual misogyny quickly become tiresome. The same is true of Roy’s racism, which seems to be a joke about his generation, and his being something of an ‘old-school Aussie’. While we are certainly not encouraged to share in their views, even irony-laced bigotry must be better handled than it is here to raise a laugh. While a few clumsily-handled jokes are forgivable, a gentle air of sexism is evident in the script, with Emma the only member of the core group not to get any funny lines. Seriously, not one. Thanks to a committed performance from Adele Vuko however, the character overcomes being somewhat underwritten to the point where she is perhaps the film’s most likeable (and certainly coolest) presence. 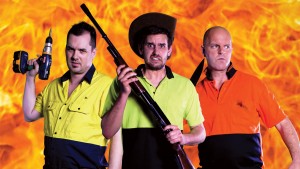 Having said that, director Declan Shrubb may have discovered a real onscreen comedy talent in radio presenter Alex Williamson, who plays Darryl. The character’s apparent inability to grasp the seriousness of the situation he finds himself in is often hilarious, as he makes casual plans for his future, including repeated attempts to persuade Roy to put him on his cricket team next year. During the frequent disputes between the group, Darryl is constantly switching the side he takes, seemingly basing his choice of allegiance on whoever expresses their opinion the loudest, or who can make a promise to find beer and weed.

This lack of assertion and direction works nicely for Darryl’s character, but not so well for the narrative, to which it also applies. Taking us on a journey from A to nowhere, the film builds expectation with the main characters spending much of the runtime devising escape plans, before sort of petering out a little with a somewhat half-baked (also how Darryl spends most of the film) third act. We seem to be going somewhere when Ryan and Lachlan warn against calling on the military for assistance, having apparently seen evidence that soldiers are killing all survivors as a precaution. Joel makes contact anyway, and there’s some genuine tension as the group awaits the arrival of two soldiers, disagreeing as to whether to accept their help or flee before they are reached. The dilemma soon becomes moot though, and the plotline is swiftly stamped out, leaving the question of the military’s motives unanswered.

Shrubb’s film is remarkably grungy looking, and the title is spot-on; it very much has a feel of a bunch of mates having made a movie. The inane chatter and conversational rhythms of the dialogue take centre-stage over any zombie slaying (although the few scenes of zombie carnage are satisfying, and given a nasty edge by that muddy photography), and are very much the film’s biggest strength. So enjoyable are the character dynamics and interactions in fact, that the threadbare plot does little to hinder proceedings. With a little more narrative agenda however, this one could have been one of the better (and I hasten to use the term) ‘zom-coms’ to arrive in years. As it is, if you can get past some bungled gender relations and grating laddishness, Me and My Mates Vs the Zombie Apocalypse makes for some enjoyably easy Friday night beer-and-pizza viewing. Getting as blazed as Darryl probably couldn’t hurt, either.