Manically Messed-Up Trailer For The Hospital 2 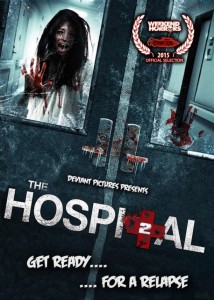 If you saw the first The Hospital, then you’ll know how sick and depraved the film is, and you’ll know that’s why you should be excited for the return in The Hospital 2.

The original film was deemed so awful by Tesco customers that they fled the store with complaints, culminating in the film actually being banned in the UK. The first trailer for the sequel threatens to cause another wave of complaints, as it looks damn right mental.

Tommy Golden and Daniel Emery Taylor will be directing the pursuit of rape, revenge and ghosts.

They said this in their press release:
THE HOSPITAL 2 amps things up a few notches and pushes the boundaries of shocking theatrics even further than the first film.

Five years after the brutal events that befell Skye and Beth inside Old Saint Leopold’s Hospital, the two survivors continue to pick up the shattered pieces of their lives. With news of the past violent events resurfacing in the press and media, the two ladies face dealing with those ugly memories all over again. Soon, though, the events become more than just memories as Skye and Beth are hurled into another fight for survival against some very real demons from their past that are hell-bent on destroying them and everything that they hold dear.