WELCOME TO THE BLUMHOUSE’S ‘NOCTURNE’ 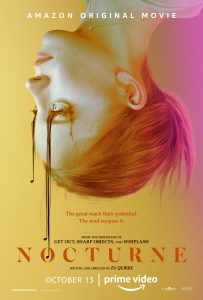 Following last week’s release of the first two standalone films making up the “Welcome to the Blumhouse” anthology, Amazon Prime has now unleashed a further two unsettling shockers that introduce audiences to new worlds and diverse perspectives whilst tapping into our deepest fears.

One of these new releases is the Faustian musical mindbender Nocturne, starring Sydney Sweeney (Once Upon a Time… in Hollywood, “The Handmaid’s Tale”) and Madison Iseman (Jumanji: Welcome to the Jungle, Annabelle Comes Home). Imparting a measure of the plight and sacrifice that young art students suffer, the film takes us inside the halls of a prestigious institution for classical musicians where a timid music student comes across a mysterious notebook belonging to a recently deceased classmate. Despite her teachers constantly assuring her that she’s destined to forever play second fiddle to her more accomplished and outgoing twin sister, this macabre notebook starts to incite something sinister inside her and she soon begins to outshine her sibling … but success never comes without sacrifice.

With the film now available on Amazon Prime, SCREAM sat down with Madison Iseman and the director Zu Quirke who reminded us of the kind of terrible things that can happen when you become too devoted to your work.

The film deals with how much people are willing to sacrifice to become the best in their speciality. Could you relate to that as an actress, Madison?

Madison Iseman: I think we are all guilty of it. We all get lost in what we do and let it take us over. But I think there is a good side to that as well because there are some great things that happen when you get lost in your work. Our film just happens to be a very good example of the terrible things that can happen. But it’s definitely something that we all have to learn how to balance.

Was the film autobiographical in any way, Zu?

Zu Quirke: It hasn’t happened to me, thank goodness. But it does come from a personal place. I played music a great deal when I was a child. I started playing the violin from the age of 4 until I was 18 and I was an extremely competitive and territorial teenager. I distinctly remember resenting anyone else getting a solo in a concert and I hated it if I had to sit behind someone else in a concert. I definitely drew on those feelings.

Do you think being a territorial person maybe pushed you to where you are today directing?

ZQ: I hadn’t actually thought about it like that. That’s very Freudian or at least very psychological. I think that the reason I ended up here is through a little bit of luck and because I’ve always wanted to tell stories. As well as music, I wrote a lot as a child and made films compulsively as a teenager. By my late teens I knew that directing was something that I wanted to do and that I could potentially do it for a career rather than music. I think what fundamentally caused me to leave music, or to stop playing on a competitive level, was the fact that there is a phenomenal amount of discipline required for you to get to a stage where you can begin to compete; and even then you have to be extraordinarily good to forge a career out of it. I guess film is too but at least with writing you can write for yourself at any time you want and I suppose that was my way into this profession. Playing music on your own and creating something fully-fledged is such a difficult thing to do. I think fundamentally I just didn’t have the talent or the discipline to make it in the music industry and I recognised that.

I think it’s quite funny too because that’s precisely the strait that Julia’s character finds herself in at the start of this movie. She’s got this fantasy of being a professional musician, of being a soloist but she fundamentally doesn’t have the talent or the capability to do that and she’s beginning to realise that and she’s left with two options: She can either choose to mature and pursue a different path and maybe be happier that way or she can cling to this fantasy and unfortunately she chooses the latter. So, maybe Nocturne could be seen as an alternate timeline of what I could have done when I was eighteen.

MI: Zu was very familiar with the classical world and she was our rock in this whole thing because she was in this world originally. She was very specific on what she wanted and what she wanted these characters to go through and she really wanted to get across to the audience the conflict between all these characters and this sort of tug-of-war that was going on in all of their minds.

Zu, was it always going to be a horror film? Also, as it shares common themes with similar movies, how did you decide on the approach you wanted to take to tell a different horror story about art students?

ZQ: That’s a really fair question. I actually never really saw it as a horror film. I still don’t really. I think of it more of a kind of psycho-drama. It’s not a scary movie in the traditional sense. I definitely wanted the film to blur the line between what is real and what is not and I wanted the audience to be able to come away with at least one different interpretation of what had happened. I enjoy movies that play with the mind. Black Swan is a great example but so too is Perfect Blue, the Kon Satoshi movie that Black Swan draws a lot from and that was a huge influence on me when I was writing this script. That is a master class in playing with the psychology of the audience as well as the character and there’s a tiny bit of that in Nocturne I think.

MI: It’s funny that you thought about my role in Jumanji when you saw me in this. I have always wanted to play super different roles and I never want to get stuck playing the same thing. It was just such a completely different experience and I love being able to stretch myself as far as I can but it was still a lot of fun. 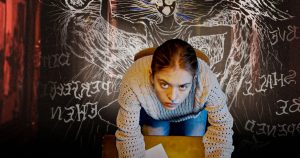 The scenes where we see the actors playing these complex musical pieces must’ve been a huge challenge to film as realistically as possible?

MI: I played a lot more music when I was younger. I can still play the guitar and the ukulele and I can play a little on the piano. But can I play the music we played in the film? Absolutely not! We actually worked with a coach for hours and hours learning how to mock play all these pieces so it looks like we have played them our entire lives. It was really hard but also actually really fun and rewarding. I remember sometimes while I was eating dinner I would start playing the pieces with my fingers tapping on the table so that I could remember all the choreography that we had to learn.

ZQ: It was really important to me that they at least looked comfortable at the piano and they were playing the right part of the keyboard. I’ve just seen too many musicians in movies holding the bow the wrong way round or not having their feet on the pedals.

At one point in the film Sydney’s character says that she has never had a PlayStation, she doesn’t have social media etc. etc. Did you go full out method and deprive yourselves of things?

MI: To an extent I feel like I live like that anyway. When I work we will be filming for 12 or 16 or 18 hours a day so I guess in a way we are forced to be in that kind of an atmosphere simply because you don’t have too much time. But, in terms of doing that intentionally, I didn’t really. I feel like I am usually pretty good at coming back to being Madison at the end of the day and I can leave my characters at the door on my way out.

The film highlights how much parents can neglect their children’s happiness despite wanting the best for them. At the same time, we see the opposite with the teachers who only want to help those they believe are worth helping. Was that something you’d experienced that you wanted to get out of your system, Zu?

ZQ: One hundred percent. Thank you for picking up on that. With the parents there is this trope, particularly with classical music-centred films, of the pushy parents and I think there is a perception that any child who plays classical music must have been forced into it. That’s just simply not true. From the people I grew up with and the music school kids I interviewed for this movie, I discovered that a lot of them had asked to take up music when they were as young as four or five. A lot of the time their parents were not even musicians. I wanted to reflect that in the narrative because I think it’s an odder and lonelier position to be in. You’re dedicating your life to this arcane and very old-fashioned art by definition and your parents can’t even understand that.

As for the teachers, they only want to foster the art in the kids. There’s a lot of rhetoric about looking after pastoral care but at the end of the day these institutions thrive off just a few students making a name for themselves. Without giving anything away, I hope that there is an alternate reading to the end of the movie because what you picked up on there is exactly what the ending is meant to imply. It’s not meant to be a critique of the arts school in particular but I do think that it’s a problem with the arts that we ask so much of young people at such a young age. These kids are falling in love with something that may never be able to love them back…

NOCTURNE is one of eight films in the “Welcome to the Blumhouse” series, and is available now on Amazon Prime.