Madam Satan to be Revived at Archie Comics

Vintage horror anti-hero Madam Satan has been re-trademarked by Archie Comics for a yet-to-be-announced comic publications, reports Bleeding Cool. While there is no word of a creative team or a release date attached to the works, Madam Satan has already seen a bit of revival via the new horror-oriented Sabrina the Teenage Witch comic titled The Chilling Adventures of Sabrina, hinting at perhaps a tie-in to the larger Archie universe. The excitement is so high that a copy of Pep Comics #16, which features the first appearance of Madam Satan, had just sold for over $11,000! That’s a pretty good number for a character that once fell into the public domain.

Madam Satan has had a spotty history with comic publication as well as having her moniker transfer between two characters while covering a span of 70 years. She was first debuted on June 1941 in the anthology Pep Comics, a series that was handled by Archie Comics predecessor MLJ Inc. Her origin story starred a woman named Tyra who was engaged to a man whose parents did not approve of her. In a fit of rage, she murdered them and when her fiancée found out, he murdered her! Ending up in Satan’s service, she was reborn as Madam Satan and was forced to seduce men on Earth into giving their souls to Satan. She was infused with the powers of hypnotism and a deadly kiss.

Madam Satan appeared in four issues before being canceled and did not reappear until 2013 in two issues of the superhero title The Fox, also handled by Archie Comics. In 2014, she was in The Chilling Adventures of Sabrina with a new origin story as a broken-hearted woman named Lola who threw herself in a lion’s pit and was trapped in Hell until she was accidentally released onto Earth by two witches. It’s highly suspected that the newest version will most likely be the one getting her own series. 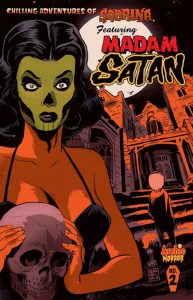 As stated, there isn’t a lot of information yet, but there is a possibility that the interest in Madam Satan coming on the heels of the Universal Monster movie revival might not be a coincidence. The original Madam Satan was created at the height of the original Universal Monster movement and the subsequent horror comic boom that followed in an attempt to bring movie-goers over to comic books. Could this be another tie-in creation to simply snatch movie monster spill over or will she see a genuine revival? Only time will tell.