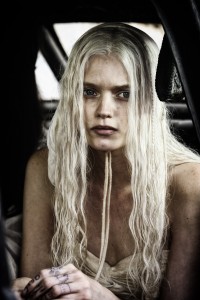 It’s been a long and obstacle-ridden journey getting Stephen King’s Dark Tower series onto the screen, but news about the project is now coming thick and fast. Matthew McConaughey has already been cast as the demonic Man in Black, joining Idris Elba who is playing lead character Roland Deschain, ‘The Gunslinger’. Reportedly now cast is Abbey Lee as Tirana.

Best known for playing ‘The Dag’, one of the ‘wives’ in Mad Max: Fury Road, Lee is currently hot property, as they say. This year will see the Australian starring in fantasy adventure Gods of Egypt, as well as Nicholas Winding Refn’s rather exciting The Neon Demon. With The Dark Tower scheduled for a January 2017 release, she has quite a year ahead.

Intriguingly, a character named Tirana is never referred to in King’s books, leading to speculation that Lee’s character is based on a minor, unnamed character in one of the later Dark Tower stories. Deadline has managed to get a snippet of info regarding Tirana however, saying: “She’s sexy and dangerous, she has fake human skin and cold snake-like eyes.”

A Dark Tower TV series is being developed by MRC to accompany the film’s planned January release. Stephen King and Ron Howard are producing the film, which is directed by Nikolaj Arcel (A Royal Affair). McConaughey has been heavily rumoured to also be playing the Man in Black (aka Randall Flagg) in the new The Stand adaptation, which unfortunately has been halted for the time being. It does suggest though, that a kind of ‘expanded universe’ model may be adopted for further King adaptations. Stephen King himself even appears as a character in The Dark Tower series, affording an opportunity for some mind-bending crossover story threads.