M. Night Shyamalan took to Twitter to announce that he’s just wrapped filming his sequel Glass. He said, “Just wrapped #Glass!! Much love to my cast & crew. Thank you for helping me tell this special story. And love to Philly for all the support!”

He is understandably not disclosing anything about the story or hinting at anything we should expect to see, but it’s exciting to learn that we’ll be seeing a continuation of the stories begun in both Unbreakable and Split very soon. 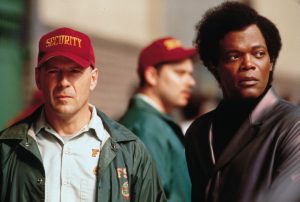 Following the conclusion of SPLIT, GLASS finds David Dunn pursuing Kevin Wendell Crumb’s superhuman figure of The Beast in a series of escalating encounters, while the shadowy presence of Elijah Price emerges as an orchestrator who holds secrets critical to both men.

It was an exciting turn of events when it was revealed that Split was a secret sequel to Unbreakable, and we’re extremely excited to see how M. Night Shyamalan furthers his universe after Split. Glass will be released on 18th January 2019, so we still have quite a wait until the film hits our screens and – hopefully – shatters our minds.