Issue #2 of Lumberjanes/Gotham Academy, the new crossover title from Boom! Box and DC Comics, immediately follows on from the cliff-hanger at the end of the last issue, with Jen and Olive having been taken hostage by a spectral group of skull-headed figures. In their absence, the remaining characters band together to form a rescue mission, piecing together the clues in order to find their missing comrades. 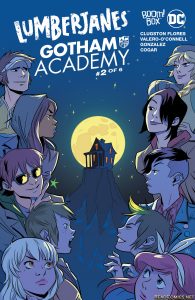 But Jen and Olive’s narrative is the one that drives the story forward, the pair finding themselves in an apparent time warp. Greenwood Lodge, or so it seems, is stuck in 1986, complete with shoulder pads, record players, and a dizzying amount of 80s pop culture references. This part of the comic is littered with sight gags, yet they always seem to be telling us something more about the characters. Jen and Olive’s horror at trying to work out how to use a rotary phone is an inspired moment, and it’s fun to see such strong characters taken completely out of the comfort zone. By the end of the comic, it’s clear that there’s more to Greenwood Lodge than meets the eye, and while some of the characters remain sceptical, there is certainly something dark and supernatural going on. Though the skull-headed figures have little to say, their presence – cold and unnerving – seem to fill the entire book.

The other team members, on the other hand, have almost too much to say. Fearing the worst, they begin to panic, arguing about the best course of action to take. In a comic with so many characters, these scenes often feel confusing, and a previous knowledge of the two franchises would be a great benefit to the reader. Because of this, Issue #2 feels more like an interval, setting up plot points and story beats that will undoubtedly become more important in later instalments. With so many characters, it’s hard to utilise each of them in a way that feels important to the narrative as a whole, but Clugston Flores writes so wittily that I have no doubt each will shine as the series progresses.

Although I said the same thing in my review of Issue #1, it bears repeating that the artwork in Lumberjanes/Gotham Academy is absolutely beautiful. The bright manga-style of the comic adds a real dynamism to the story, and though Issue #2 is pretty heavy on dialogue, the artwork ensures that the comic keeps its momentum. Whitney Cogar’s colours – ranging from cool blues and greens to more unearthly pinks and purples – add cohesion to a story that might otherwise seem confusing, especially for readers who are new to the characters. The end of the comic, in which Jen and Olive sit down to a disquieting dinner, is gorgeously done, all rendered in unnaturally sugary pastels – a sure sign that something is wrong. 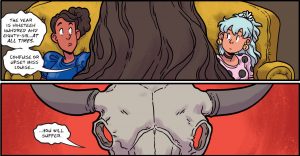 All in all, Lumberjanes/Gotham Academy #2 reads like a cross between Friday the 13th and Harry Potter, but in the best possible way. This is horror for the young adult market, though it is often more daring and effective than anything aimed at adults. Though Issue #2 is more about establishing the story than progressing it, the characters here are so fully realised that the book is often more intelligent than it would initially appear. I for one can’t wait to see where it goes.