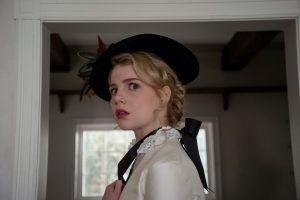 Lucy Boynton, recently of I Am the Pretty Thing that Lives in the House and Don’t Knock Twice, has revealed that she plays a cult leader’s daughter in Apostle, the anticipated upcoming film from The Raid director Gareth Evans. Chatting with Collider, the actor talked about her character and the film itself.

“It’s slightly more story heavy than The Raid films,” Boynton (pictured) told the site. “It’s about a cult and a guy goes to rescue his sister from the cult and I play the cult leader’s daughter who slightly starts to realize the darkness of all that her father’s cult entails. It’s fun and bloody,” she adds. “There are some really great action sequences that Raid fans will be pleased with.”

“The year is 1905. Thomas Richardson travels to a remote island to rescue his sister after she’s kidnapped by a mysterious religious cult demanding a ransom for her safe return. It soon becomes clear that the cult will regret the day it baited this man, as he digs deeper and deeper into the secrets and lies upon which the commune is built.”

No stranger to the subject of cults having explored the idea in his V/H/S/2 segment Safe Haven, Evans returns to similar subject matter with Apostle, which he wrote and directed. The period thriller was produced by XYZ Films, Severn Screen and Evans’ One More One Productions.

Apostle will be released by Netflix in 2018.