Luca Guadagnino Talks Lack of Colour in his Suspiria

One of the most striking elements of Dario Argento’s Suspiria is its glorious and bright colour palette that works as a contrast to the thematic darkness in the storyline. However, when speaking to Variety about his take on the witch story, director Luca Guadagnino (A Bigger Splash, Call Me By Your Name) spoke about a startling difference between his and Argento’s feature: 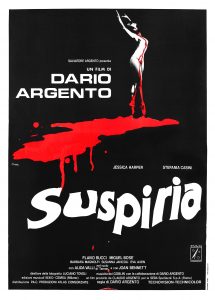 “It’s a film about guilt and motherhood. It has no primary colours in its colour palette, unlike the original. It will be cold, evil and really dark.”

I commend Guadagnino for this attempt to deviate from the original and actually hope that the differences don’t end with the colour palette. Nothing would be worse than a shot-for-shot remake of Suspiria, right? I am much more interested in seeing something new and refreshing, rather than a rehash of Argento’s masterpiece, so sign me up!

Suspiria could be with us as early as this year as production has now wrapped on the feature. The film stars Dakota Fanning, Tilda Swinton, Chloe Grace Moretz and Mia Goth.