Love and Death Collide in the Trailer for The Housemaid

A romantic and scary trailer has been unveiled for The Housemaid and it shows the film’s themes of revenge, love and death colliding in an epic clash. The trailer shows a forbidden romance resulting in the arrival of a vengeful spirit. 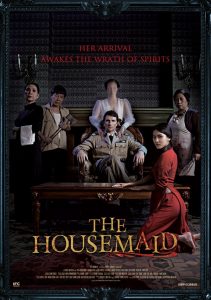 The trailer looks promising and teases a few of the film’s scarier moments, but we particularly like the rain-drenched landscapes and the film’s foreboding atmosphere. Hopefully the film will deliver supernatural frights as well as an engrossing tale of undying love.

Synopsis:
When an orphaned Vietnamese girl is hired to be a housemaid at a haunted rubber plantation in 1953 French Indochina, she unexpectedly falls in love with the French landowner and awakens the vengeful ghost of his dead wife… who is out for blood.

The Housemaid comes from writer-director Derek Nguyen – who is making his feature debut – and stars Kate Nhung, Jean-Michel Richaud and Kim Xuan. The Housemaid will be released in the UK on DVD and Blu-ray on 19th February, so will make for the perfect spooky post-Valentine’s Day watch.