Synopsis:
Handsome, desirable and oozing self-confidence, Spencer Cutler is a psychopath void of empathy or guilt. Living his life to take advantage of others, he sets his sights on his next victim but an encounter with a new brand of ecstasy sends his life into a downward spiral when he begins to feel emotion for the first time. 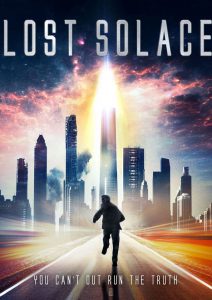 Showing an undeniable passion for his craft, Canadian filmmaker Christopher Scheuerman has set the bar high with his latest feature, Lost Solace. Not only does it operate as an intriguing character driven thriller but it is also one most visually stunning films that I’ve seen on screen this past year. As a whole, Lost Solace can only be described as a journey that will take its audience on a ride that certainly commands attention but in turn, rewards patient viewers with plenty of substance to consume.

The plot follows Spencer Cutler, a playboy gifted with good looks and no sense of fear as he seduces and charms his way into the lives of every wealthy woman he meets. It’s not until one fateful night, he ingests the latest designer drug in the basement of a club which turns his world upside down and he begins to feel his own emotions for the first time and what follows is a deeply engrossing transformation that had me glued to my seat.

As director, writer, producer and editor, Scheuerman clearly demonstrates his ability as an artist and proves without any doubt that he possesses the tools to deliver something hearty for his audience to ponder. Balancing moments of intense horror against a backdrop of emotional turmoil, Lost Solace places its focus on the transformation of the lead character from a man of strong steady and confident demeanour and slowly strips away until he is forced to start again despite his carnal urges to cause chaos.

Speaking of which, Andrew Jenkins (who also co-wrote the script with Scheuerman) is phenomenal in the lead role as Spence. His performance flawlessly captures all of the emotional range required to make his character’s transformation from invincible psychopath to broken man fascinating watch. The remainder of the cast is equally as sound but pale in comparison to Jenkins who powerfully portrays a character with mental illness with the utmost respect showing grace and intensity in all the right places.

Overall, there is a pleasing amount of polish to the film which is heightened by Thomas Billingsley’s stunning cinematography. Every shot is carefully crafted and expertly directed. As a whole, there’s really not that much to grumble about where Lost Solace is concerned. It may transcend several genres and it’s comparisons to films as Limitless and American Psycho may be somewhat misleading but the patient viewers out there will thoroughly enjoy what Scheuerman and his team have to offer. It is for this reason that I hope Lost Solace gains the audience it deserves.