Lots of people online got all unnecessary on Tuesday when a number of sites reported that a print of Tod Browning’s London After Midnight – possibly the most infamous ‘lost’ film of them all – may have been found. The legendary director’s silent horror – which starred silent era icon Lon Chaney – was released by MGM in 1927, but destroyed and lost along with many other films in the studio’s vault fire of 1967.

Word of the possible discovery spread when producer and Love Object director Robert Parigi posted the following on his Facebook page:
“I’m noticing chatter that a 7-reel print of long-lost Tod Browning/Lon Chaney film LONDON AFTER MIDNIGHT has been discovered in Spain! I had long heard rumors of a print in Cuba. Is this perhaps that print, now sent to Spain? 20 years ago, I heard rumors of a print in the U.S., and contacted the supposed owner offering to transfer it to (then state-of-the-art) D1, but when it came time to produce the print he backed out.”

It seemed a little unlikely, it must be said, that such a film could have stayed hidden for so long, not to mention the fact that rumours of a newly-discovered print have risen numerous times before. Such things do happen however; an almost-complete original cut of Fritz Lang’s Metropolis was unearthed in Buenos Aires in 2008, and the thought-lost hand-painted colour version of Georges Méliès’ A Trip to the Moon was found in Barcelona in 1993 and restored in 2011.

Alas however, this is not one of those times. Just hours after the story broke, Parigi updated his post with:
“This just in, via pm from [actor] Micah Carey: “No print of ‘London After Midnight’ has been found. We did find some frames from the film that may have been cut out of a vintage trailer!”

A few frames… the seeds from which a rumour grows!

“Sorry this turned out to be another false alarm. My inner monster-kid was too eager to wait for confirmation before posting.”

Carey gave more info, saying: “A film archive in The Canary Islands received what look to be nitrate frames from London After Midnight around 1995. They got these from a private collector.

In 2012, the archive opened a Flickr account and posted this image among others it was posted for about five years and nobody seemed to notice it until last month.

Then this image was posted shortly thereafter… These were both posted on the Facebook page Universal Monsters & More. I’ve contacted them and they have said they have more stills and that they will share them with us.

The school of thought seems to be that these were cut out of trailers for London After Midnight by a projectionist in the Canary Islands. But nobody is sure.”

Below are the frames to which Carey refers. London After Midnight remains lost, and only the most optimistic among us would hold out hope of that changing anytime soon. 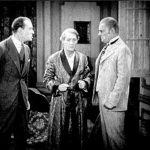 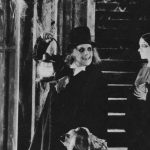 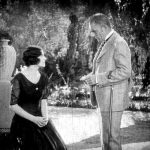