Lloyd Kaufman Calls Toxic Avenger 5 “The Best One Yet”

I’m not sure many of us have been calling out for a Toxic Avenger 5 – come on, the fourth was not good – but Lloyd Kaufman is keen for fans to get excited about more from Toxie. Kaufman has said:
“It’s definitely coming. […] This is a very ambitious Toxic Avenger movie. The script is complete and it will focus on Toxie’s two children who, 20 years after part four, have all grown up. And one has mutated into a very strange being [laughs]”

He also states that they need to get the money together for it first and plans to do that after the release of the Troma film Shakespeare’s Shitstorm. Yep, it’s Troma’s version of The Tempest.

He goes on to describe what we can expect from the fifth film and says:
“Fans can expect more low-budget action with the usual Troma mix of girls, guts and gruesome gore. Toxie is going to go to Chernobyl in this one,” Kaufman continued. “It will cost just $100,000 – but I think it is the best one yet. I have worked with [Guardians of the Galaxy director] James Gunn and the script we have for The Toxic Avenger 5 is the finest I have read. It shows Toxie fighting the bureaucrats and the obnoxiousrich people who are harming the people of Tromaville.” 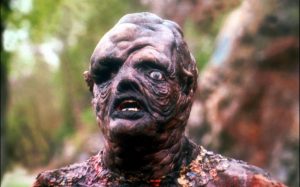 Not only is there a fifth Toxic Avenger film in the works, there is also a remake of The Toxic Avenger getting made with Sausage Party’s Conrad Vernon attached. Although Kaufman himself is looking forward to it – “I have spoken to him and he knows all the Troma movies and is a big fan. I think he really understands The Toxic Avenger and I believe he will bring a cartoon sensibility to it.” – I’m not going to hold my breath for a decent re-telling.