Since the late 19th century, vampires have always been used as a sexual metaphor, specifically through the penetrative image of biting and drawing blood. They are usually pale, beautiful and seductive, and are often used to warn of the dangers of sexual liberation and unprotected sex. In Lips of Blood (‘Lèvres de Sang’ in the original French), director Jean Rollin uses vampires in a different way, subverting conventional vampiric imagery in order to relate to a modern audience. Though the film often reverts to type, Rollin is a proficient director, and the film will appeal to those with a taste for the stylised and the illusory.

At the launch of a new perfume, Frédéric sees a poster of a ruined chateau (Sauveterre Castle in Aquitaine) and experiences a vision of him being there as a child, speaking to a beautiful, otherworldly girl named Jennifer. Convinced this is a suppressed memory, Frédéric begins searching for her, leading to him being chased by four scantily-clad vampiresses, but whether they want to hurt him or protect him isn’t always particularly clear.

The second half of the film is where it all gets rather more interesting, as Frédéric is forced to choose between his god-fearing mother – who demands Jennifer’s head – and Jennifer herself, who he is adamantly in love with. Torn between the safety and comfort of his family and his desire to stand alone as an adult, Frédéric must decide where his allegiances lay, leading to an exquisitely-shot sequence on the beach near Dieppe.

Lips of Blood is dreamy and languorous, filled with cold, watery images. The shots are often saturated in deep blues and greens, and there is even an effective set-piece inside a closed-down aquarium. But in spite of the film’s inherent dreamlike quality, it is often painfully slow, and rewards viewers who prefer artistic style to narrative logic. Certain sequences go on far longer than necessary, while others – like Frédéric’s mother explaining who Jennifer really is – seem rushed and unfinished, leaving as many questions as there are answers. But the psychological connotations of the film, particularly in the third act of the film, more than make up for the uneven pacing. By the time Frédéric returns with the severed head of a mannequin, kissing it like Salome before casting it into the flames, it is clear what Rollin intends to say: that Frédéric can only attain actualisation by casting off his familial ties. 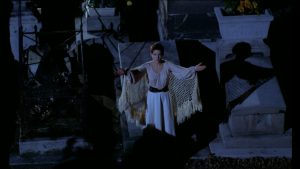 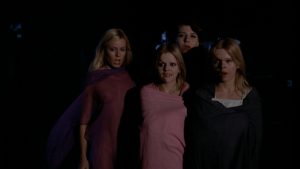 Jean Rollin, who directed a number of vampire films throughout the late 60s and 70s, also directed pornography, and it’s clear that the sex here is used only to titillate. In one scene, Frédéric searches for the woman who took the picture of the chateau. Before he arrives, the photographer is taking pictures of a naked woman who, for some reason or another, starts to masturbate in front of the camera. This goes on for close to five minutes, and considering that neither character have much impact on the plot, seems entirely unnecessary. The sex scene on the beach at the end of the film, which is both tasteful and artfully shot, is the complete antithesis to this, as it is completely justified within the context of the narrative.

But even though Lips of Blood, with its achingly slow pace and gratuitous sex scenes, is far from a perfect film, its take on the vampire mythos still feels fresh and exciting today, some forty years after it was made. Though clearly an acquired taste, Rollin’s direction is exquisite throughout, and the set design and costumes add a baroque twist to what is otherwise surprisingly modern. More fairy tale than horror film, Lips of blood is the perfect antidote for those tired of the old clichés. But don’t be fooled by its soft, dreamlike atmosphere; the film has more than enough bite to satisfy.