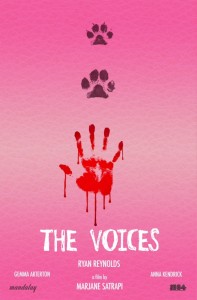 Lionsgate Films have just picked up the North American distribution rights to Marjane Satrapi’s THE VOICES, starring Ryan Reynolds. Reynolds plays the role of Jerry Hickfang who takes on evil influences from his talking cat and dog. Satrapi will helm from a script written by Michael R. Perry (‘Paranormal Activity 2’). THE VOICES also stars Gemma Arterton (‘Hansel & Gretel: Witch Hunters’), Anna Kendrick (‘Up in the Air’) and Jacki Weaver. No official release date announced as of yet.

Synopsis:
Jerry Hickfang, a lovable but disturbed factory worker who yearns for attention from a woman in accounting. When their relationship takes a sudden, murderous turn, Jerry’s evil talking cat and benevolent talking dog lead him down a fantastical path where he ultimately finds salvation.