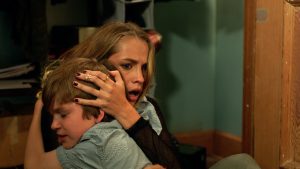 Synopsis:
Rebecca (Teresa Palmer) and her younger brother Martin (Gabriel Bateman) must face a supernatural threat that is attached to their mother Sophie (Maria Bello); one that only appears when the lights are out.

Lights Out is a solid and steady supernatural tale that succeeds for achieving where so many modern horror films fail. Firstly, the characters are an interesting, likeable bunch, rather than your typical set of annoying young folk that you can’t wait to see killed. They all have their own shining personalities; Bret (Alexander DiPersia) becomes a much-needed opportunity for comedy that takes the edge off and works well as a complex love interest for Rebecca. Palmer and Bateman both give convincing, touching performances as the siblings at the centre of the horror and Maria Bello is heart-breakingly ideal as the shattered parent struggling to hold herself together. The performances are one of Lights Out’s strongest elements, as the cast credibly bring the emotive tale to life and elevate the film about many of this year’s big studio horror flicks, like Sony’s The Forest and Universal’s The Darkness which didn’t manage to deliver the thrills and spills they probably hoped for.

Lights Out is a feature adaptation of David F. Sandberg’s creepy short film of the same name which proved there was a solid idea in the idea of a creature emerging only in the dark. The idea, however, does not translate quite as well to a feature-length film because once you try to delve into the origins of the creature you risk falling into far too familiar territory. The film does opt for a slightly timeworn tale of a family in peril, but the angle it adopts does allow for a few surprises. The combination of both supernatural and natural terror in the film’s focal family does make for a frequently thought-provoking watch. If we were to ignore the ghost’s presence, we are still left with a quietly chilling story of a mother suffering with mental illness and guilt. Lights Out physicalizes her pain in the form of a paranormal entity, thus the ghost becomes an extension of her pain that we can see physically affecting her children. Lights Out certainly doesn’t delve into these themes as well as The Babadook or even The Orphanage, but there is a clear desire to explore psychological darkness within its preoccupation with a typical Hollywood-style haunting. Light Out does extremely well to explore an explanation that doesn’t feel too clichéd and that should be praised, even though it is somewhat predictable.

The film’s eventual handling of the mother, however, is particularly problematic. What began as a tender treatment of this woman’s struggle becomes too bleak, as if the writers were desperate for one last sad hurrah.  Quite frankly, it’s a disappointment that suggests Lights Out only sees a mere light at the end of Sophie’s tunnel. Rather than choose to have her fully conquer her dark demons, Lights Out prefers to distinguish this character in a way that is baffling, rather than affective. Instead of drawing on our feelings of empathy and sympathy, a harsh and final line is drawn that will only incite feelings of dissatisfaction and irritation. The film had a clear opportunity to head in to a more positive light – don’t get me wrong; I’m all for dreary and open-endings when appropriate – but Lights Out takes a silly stab in the dark with its conclusion and some viewers may find it unnecessarily downbeat.

On a more surface level, Lights Out proves that traditional jump scares and a simple, spooky atmosphere still have the ability to incite fear in an audience. The film does superbly well to maintain a consistent level of terror throughout its runtime considering it’s, quite honestly, relying entirely on a gimmick. Creatures dwelling in the dark are nothing new, but Lights Out adds an extra layer of control for the characters so they have the ability to shun the supernatural threat by simply turning on the light. As Lights Out shows, however, it’s easier said than done, especially when the entire street is thrust into darkness. The characters take on a handful of creative solutions to combatting the dark-dwelling entity that make for a lot of fun. Tension is effortlessly created as the characters rush for a light source and Lights Out will certainly have you laughing nervously more than once. 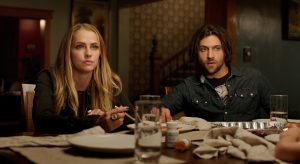 Aside from a few problems, this is a mostly entertaining watch that should leave a few of you weary when you turn your lights out. It’s far from spectacular, but there’s plenty to enjoy in its mostly effective and solid execution of frights and scares. It’s not ground-breaking, but Lights Out is simply great; achieving what it sets out to do and there’s nothing wrong with that. It’s confident, fun and has plenty of heart in the centre of its dark outer shell, but never feels overly sentimental. It’s definitely worth watching if you’re after a few solid thrills.