Liam O’Donnell Talks ‘Skylin3s’ Ahead of the World Premiere

Despite most critics coming down on 2010’s Skyline like a tonne of bricks, in hindsight, no one can really fault just how unique a spin it put on mainstream alien invasion tropes. Thankfully, undeterred by initial criticism, one of the original film’s writers, Liam O’Donnell took the plunge and penned and directed 2017’s Beyond Skyline, a sequel that proved to be far more popular with audiences, generating all kinds of buzz on the festival circuit following a world premiere at the Sitges Film Festival.

O’Donnell’s much more adrenaline-fuelled follow-up left audiences hungry for more of the same which why we’ve only had to wait another three (instead of seven) years for part three. This direct sequel sees Lindsey Morgan reprise her Captain Rose Corley role but this time taking centre stage as she’s tasked with taking the fight to the Harvesters when a virus threatens to turn all friendly earth-dwelling alien hybrids against humans.

With the world premiere at the FrightFest Halloween Digital Edition right around the corner, as well as a subsequent invasion of the international festival circuit (Trieste Science+Fiction Festival, Tokyo International Film Festival and Other Worlds Festival in Austin, Texas) SCREAM hopped onto a Zoom call with O’Donnell who revealed the kind of bonkers alien antics audiences can expect now that the franchise is about to be thrust into the alien world for the first time… 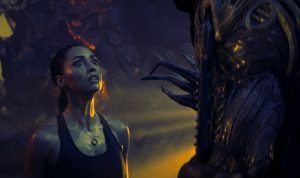 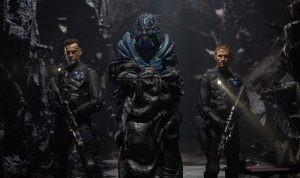 SCREAM: The film premieres in London on Friday which is great, but it must also be disappointing that you don’t get to watch the world’s first screening with an audience?

LIAM O’DONNELL: I was thinking about this last night because I had such a great time with Beyond Skyline on the festival circuit. As I got all of that experience with the previous film, I am not so disappointed this time around. Who I really do feel bad for this time are first time filmmakers whose films will be screening and who have never gotten to experience that. They have busted their asses for years and they’re finishing their films right now. They have been robbed of the victory lap in a way. That was so nourishing and so encouraging for me creatively. We’re just so lucky to have been able to do this for 10 years now.

You literally completed the film 10 days before the world premiere. Is that as much of a nightmare as it sounds or is such a tight deadline an advantage in that it forces you to make quicker decisions that you would normally take weeks or even months to decide on?

It’s definitely a good exercise like you are saying. But it’s also very nerve-racking. Even at the last screening that I saw I could feel how it was out of my hands now. It has been sort of a grieving process because I really enjoyed making this one so much. I enjoyed obsessing over it and probably staving off existential despair during the global pandemic but now it’s gone and it’s out there and it’s no longer got me there to tie its shoes and clean the spit from its mouth. Now everyone gets to bully it around (laughs).

You moved a lot of things around for Beyond Skyline and the third one runs with a lot of similar themes but feels very different. How did you decide what to keep and what new direction to take?

Everything had been really positive until the first film actually released and that was when we could feel the wind coming out of our sails. I was supposed to go and see it at the Chinese theatre in Hollywood and I just couldn’t do it because I’d been reading Twitter all the way there. I ended up just going to a bar across the street instead so I never got to see the film on that big screen. That was always a regret so I decided I was never going to that let happen again and far all of the festival screenings for Beyond Skyline I didn’t just do the intro and the Q&A afterwards. I watched the entire film each time because it was a sacred experience for me because I knew I had to learn from the audiences reactions each time.

Also, I just wanted to make the kind of films that I wanted to see and I think that for Beyond Skyline I was much more of a fan of action films and I saw that one of the problems with the first film was the fact that it was a thriller sold as an action movie. That was when I decided it was time to just make the goddamn action movie that everybody wanted to see. We did actually write up a basic treatment early on that ended up being Beyond Skyline because I think we all inherently knew that that was just something that we, and the audience, wanted to see. Then I just completely lucked out by setting it over in Asia and we scouted in Indonesia and were able to get Iko Uwais and Yayan Ruhian from the Raid films in there. That totally injected the film with some amazing energy.

On the third film, we decided to keep things going with this attitude and spirit but I also realised we couldn’t make Beyond Skyline part two. We wanted to do something that introduced entirely new genre elements that turned things into a proper sci-fi adventure film. This film certainly takes its time with the characters and with the story to set everything up to make sure you buy into this fairly ridiculous storyline that will take you to an alien planet in an attempt to save the Earth. Then, as the movie progresses, we get to add in some of the flavours that we introduced in Beyond but we push them further forward. This is especially the case with Lindsey’s powers in terms of how they advance and evolve across the story. We build her into a proper superhero so the two new genres that I got to play with are the sci-fi space adventure elements and the superhero genre within a sci-fi story.

Like you said, you take us on a “fairly ridiculous” journey and it’s got its fair share of humour and insane action but it never really falls into the campy, cheesy B-movie realm.

Thank you for saying that. Some people do class it as a B-movie but it really doesn’t bother me one way or the other because even with the second film people thought it was bonkers and people would say things like, “It’s fucking crazy … but I like it!” you know? Those kinds of comments just made me think, “Just have the balls to say you like the movie.” I think that with the third movie it’s even easier for them to say, “You know what? This is actually just a good movie” because I think the movies get better. The further you get away from the original releases the estimation of the films seems to grow. As we are on the back of Beyond Skyline now, people are probably able to admit that these movies are a lot of fun to watch.

Tied to that, most of the comedy and levity comes from the hybrid alien protagonist. Why so?

Trent is like a dude to me. We just felt that it would be really funny to remind you that he was human by making him the comic relief. It was one of those things where early on in the script I would go back-and-forth between subtitling him or not because I wasn’t sure whether that was going to work. In the second movie we felt that suddenly subtitling him would change the genre too much and make it feel like a Transformers movie. That’s not to say that I don’t love those movies.

When it came to do the third movie, as it is set so far in the future and we were really introducing Trent as a character in the first act, it just made sense that we could let the audience in, especially now that we were a different genre to begin with. It was great to have so much fun with him and use him to ground the movie as he is the most unique spin in there. And the fact that the character works so well also shows you that the visual effects are only as good as the performances and the reactions to those performances.

We can’t not talk about your lead actress, Lindsey Morgan. I’m guessing it was a deliberate decision to shift the protagonism from Frank Grillo and Iko Uwais to an Ellen Ripley type kick-ass female character?

We only shot with her for one day on Beyond Skyline but we were all like, “Oh wow. She can do everything!” That inspired me to build the story around her character and her strengths. It’s funny that you mention Ripley because I remember one day when Lindsey came onto set with a tank top Alien look. See looked like a person who had been assembled from a variety of James Cameron movies. She looked like Linda Hamilton and Sigourney Weaver with a bit of Avatar and Alita. She just looked like a composite of a James Cameron heroine. It was definitely a “pinch me” moment and I felt like we had something really unique there.

What would you be most interested in doing next? Are you more invested in continuing this franchise or do you want to try your hand at a different genre before maybe coming back to Skyline?

I’m always trying to develop as many different things as I can but I think that one of the great things about this franchise is the freedom that we have allowed ourselves to have. Each film is so different that it doesn’t feel like we’re just remaking the same movie each time so if we were to do another one I would continue in that direction. Movies are so hard to get made, especially indie movies, but sequels are somewhat easier to get made. I also feel it’s my responsibility to give the audience something new each time. We’ll see what happens. It’s up to the audience but I am extremely grateful that we have made it this far and I love the characters and I love the world so I hope to continue being able to tell these stories.

The world premiere of SKYLIN3S will close FrightFest Halloween Digital Edition 2020 on 25 October.