Let’s Summon a Demon with the Trailer for Knucklebones 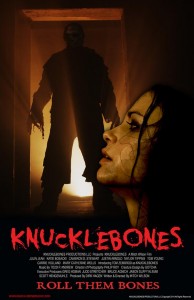 A wicked trailer has been unleashed online for Knucklebones, which is being pitched as an ultra-horror version of Jumanji. Let’s face it, Jumanji itself is pretty terrifying, but imagine that instead of Alan Parrish, a demonic entity from hell managed to claw its way into your reality. Terrifying, right?

Synopsis:
After suffering a near-death experience, Neesa Avery has literally been to Hell and back. When she and a group of friends discover an ancient dice game hidden behind a wall in an abandoned WWII factory, they unleash the powerful demon Knucklebones. As they attempt to finish the “game” it becomes clear Knucklebones has special plans for Neesa and, having met her briefly in Hell, is saving her for last.

Watch the trailer below and introduce yourself to Knucklebones. It’s filled with plenty of expected slasher moments; with women being tormented while they sleep, a chainsaw-wielding killer that looks a lot like Leatherface, lots of running and lots of screaming. It looks fabulous.

Knucklebones has been written and directed by Mitch Wilson and has a release date slated for 2016 from Midnight Releasing.