Let’s Play with the Boys in the Trees Trailer 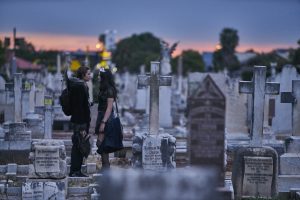 Halloween is only around the corner now, so get ready for those Halloween-set films to come knocking for a trick or a treat. A film that seems to be offering treats, tricks and scares alike is Aussie horror Boys in the Trees from writer-director Nicholas Verso.

Boys in the Trees follows a couple of teen skaters who head out on a surreal, terrifying journey that fuses dreams, reality and fantasy on Halloween night in 1997. Check out the trailer below and you’ll see that it is the perfect blend of a pure horror and a coming-of-age drama. Packed full of imagery that is equally as beautiful as it is spooky, Boys in the Trees could be another film that proves Australia delivers some of the best genre films.

Boys in the Trees stars Toby Wallace, Gulliver McGrath and Mitzhi Ruhlmann. It will be released this year in Australia; we’re guessing it will land at some point in October.