LET HER OUT: Film Review 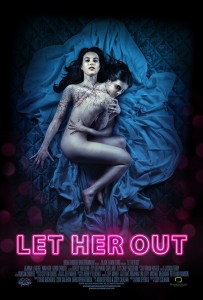 Evil Twin shocker Let Her Out opens on a troubling note, with a woman providing (and enduring) a series of paid-for sexual encounters in a motel room, before a shadowy final visitor bursts in and rapes her. She later discovers she is pregnant and, desperate and alone, takes a pair of scissors to her unborn, killing herself in the process.

From here on in, proceedings fail to get much cheerier in a film which is dark, stylish and cold. So very, very cold. Let Her Out is the latest from Canadian indie horror studio Black Fawn Films, who’s recent Bite found a large audience through a strong international festival run. It is directed by Cody Calahan, who produced Bite and directed viral horror Antisocial and its sequel for the studio.

Jumping 23 years from the bleak opening sequence, Let Her Out follows Helen, who survived her pre-birth assault from her frightened mother, and is now a bike courier living in Toronto with her friend and confidante Molly. Following a traumatic accident, Helen begins to experience blackouts and jarring night terrors, prompting doctors to perform a CT scan on her brain. They discover a benign tumour; the remnants of a ‘vanishing twin’, absorbed by Helen in utero. With her twin now growing, doctors book Helen in for surgery, but her twin sister has plans of her own.

Early on the film establishes a sort of restless unease, with a hushed stillness dominating the first act, albeit one spiked with a couple of dizzying party scenes. Despite the heavy mood and an intriguing premise though, the film initially fails to grab hold. Needless exposition and character relationships that don’t quite convince make it hard to invest emotionally, whilst the scares prove generic if not ineffective. As Helen’s twin’s influence increases however, the film almost imperceptibly tightens its grip, working itself into a panicked rhythm that mirrors a gradually fracturing mental state. As Helen’s visions become more frequent, jagged edits mix with that enduring stillness to give a feel of the film itself suffering heart palpitations and a shortness of breath; a cinematic anxiety attack.

The extraordinary rhythm and pacing prove the film’s biggest strength, and mean that even when falling back on near-clichés – warnings written in lipstick on mirrors, a creepy painting repeatedly reappearing – there are no unintentional laughs. It toys with familiar horror codes yes, but it plays them deadly straight, and holds them inside a wicked premise. Some of the scares however still come across as uninspired, lazy even, taking us out of the film’s well-crafted world even as they make us jump.

The biggest obstacle preventing Let Her Out from maximising its potential though, is the somewhat reserved central performance from Alanna LeVierge, making her feature debut. As Helen’s mental state slips ever closer to that of her late mother, we need to see her become wildly unhinged as she begins to break. There’s a self-consciousness to LeVierge’s performance that prevents her from letting loose when the role requires it, taking away from the impact of some of the more violent later moments. It is by no means a bad performance; just one perhaps more suited to a supporting role.

Virtually the whole of Let Her Out is set after dark, with soft blues and pinks dominating. The relentless nighttime scenes nicely evoke the blurry, hyperreal sensation of waking in the middle of the night, whilst the muted colours hint at a Winding Refn-esque neon, but distanced; as though we have stepped out into the cold night while the party continues inside. It’s a feel that works well for a film whose central premise harbours a theme of hiding from what lives within.

Were it not for a few laboured frights and a central performance that would sit better in a less ambitious, more generic horror, Let Her Out could have stood close behind the best that modern horror has to offer. As it is, it’s an effectively unsettling and moody film with a strong central premise and an organic and meticulously crafted structure that gradually closes in around the viewer. The emotion inherent in the story may go frustratingly unexplored, but the film holds together with striking visuals and a quiet intimacy that permeates even through the scenes of frenzied horror.