The MPAA has granted Alexandre Bustillo and Julian Maury’s Texas Chain Saw Massacre prequel Leatherface an ‘R’ rating which is very promising, indeed. When we caught up with the French directing duo earlier this year, they described the film as being quite violent, but they were unsure what rating the film would get. They hoped it would one day receive an ‘R’ rated version on DVD, but they probably didn’t expect the first cut to be granted ‘R’. You can read the full interview here. 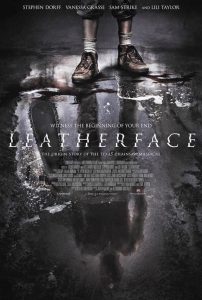 Synopsis:
A young nurse is kidnapped by a group of violent teens who escape from a mental hospital and take her on a road trip from hell. Pursued by an equally deranged lawman out for revenge, one of these teens is destined for tragedy and horrors that will destroy his mind, moulding him into the monster we now call Leatherface.

Bustillo and Maury direct the film from a script by Seth M. Sherwood and the film stars Sam Strike, Vanessa Grasse, Jessica Madsen, James Bloor, Sam Coleman, Jessica Madsen, Lilli Taylor, Stephen Dorff, and Finn Jones. Hopefully we will receive a release date for Leatherface soon, because I don’t think we can wait much longer.