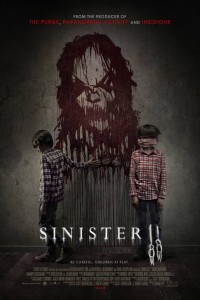 It’s a mere few days until the release of Sinister 2 and I’m excited. Ciaran Foy (Citadel) is at the reigns of the sequel to 2012’s Sinister, with Scott Derrickson – the first film’s director – and C. Robert Cargill on-board as the screenwriters. In this new clip from the film you can learn about the mythology of Bughuul the boogeyman and how important the children are in his devilish plans.

Synopsis:
“In the aftermath of the shocking events in “Sinister,” a protective mother (Shannyn Sossamon of “Wayward Pines”) and her 9-year-old twin sons (real-life brothers Robert and Dartanian Sloan) find themselves in a rural house marked for death as the evil spirit of Bughuul continues to spread with frightening intensity.“

I found Sinister to be a nice surprise. It was hugely entertaining and quite terrifying at times. The sound design and music were a treat and heightened the fear and tension superbly. I hope Sinister 2 can match its predecessor’s horror greatness, but you know what they say about sequels…