It’s not often one gets to say this (and I’m very excited that I get to), but Lamberto Bava – son of legendary Italian director and arguably the inventor of the giallo Mario Bava – has a new horror film on the way, and we’ve got all the plot details for you below!

The film – which is unrelated to a certain 1988 comedy with which it shares its name – is called Twins, and it’s heading to the EFM in Berlin. It stars Oscar nominee Gérard Depardieu, alongside Lars Eidinger, Frédéric Lerner and Rabeah Rahimi. Read on for the full synopsis but be warned, as it seems to contain some fairly big spoilers. 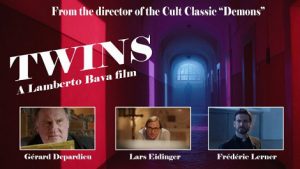 “The massacre of the Levi family, of which only adopted twins Eva and Greta survive, pits priests Father Michel and Father Paul against the powers of evil, both convinced that the twins are diabolical. The girls are then confined to a Halfway House, where a series of mysterious deaths occur, requiring the intervention of Police Commissioner Zanda, who fails to come up with any answers. Recruited by Bishop Tarcisi Lombard, the two priests set out on what will be a no-holds-barred fight against the twins, all the way to an exciting finale that will reveal Father Paul to be truly evil. However, Bishop Lombard, the deus ex machina of the situation, turns out to be the embodiment of Evil on Earth. In a very definitive upheaval of events, we learn that the two priests were killed in a road accident sometime before, their souls captured by the twins.”

Lamberto Bava made a string of mostly awesome schlockers in the 1980s, including Macabre, A Blade in the Dark and possibly his best known work, 1985’s demented splatter classic Demons (pictured), which he followed up with Demons 2 the following year.