LA Punk Icons Unite in The Icarus Line Must Die

Acclaimed LA post-hardcore crew The Icarus Line star in punk rock thriller The Icarus Line Must Die, which has just been picked up for North American distribution by Dark Star Pictures.

A tense thriller that blends fact and fiction, the film has already picked up a handful of festival awards, including Best Feature at Highland Park IFF. It was written and directed by award-winning music video director Michael Grodner. 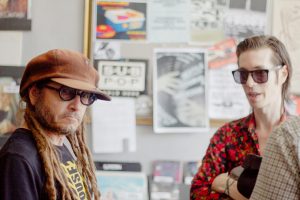 Here’s the official synopsis:
The Icarus Line Must Die is a dramatic narrative feature set against the backdrop of the current LA underground music scene. The film tracks Joe Cardamone, front man of notorious punk bad boys The Icarus Lineas he navigates his way through the ups and downs of the modern music landscape. With a new record completed and a major label deal within sight, Joe fights to keep his band, his relationship and his life from completely falling apart.

A number of notable members of the underground LA punk scene also appear in the film, including Keith Morris (Blag Flag, Circle Jerks) and Ariel Pink.

Dark Star release The Icarus Line Must Die in US cinemas in June, with a home release to follow in July.