KING’S THE DARK HALF GETTING ANOTHER ADAPTATION

The Dark Half is the latest Stephen King novel getting adapted (on in this case, re-adapted) for the big screen. 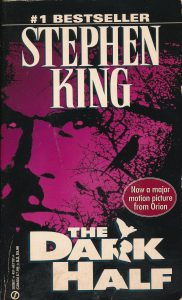 Published in 1989, The Dark Half centres around a novelist, Thad Beaumont, who discovers his pseudonym, George Stark, has come to life and gone on a vicious murder spree. King wrote the novel shortly after his own pen name, Richard Bachman, was revealed.

Alex Ross Perry (Her Smell) will be helming the latest adaptation for MGM. MGM was also behind the 1993 version, which was directed by George Romero and starred Timothy Hutton as Thad and Stark.