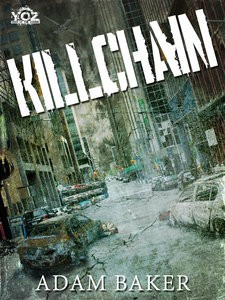 Killchain by Adam Baker is Infected books opening novella in their year of the Zombie series. Twelve authors, twelve zombie novellas and all to celebrate 15 years since the publication of Infected Books first novel, David Moody’s Autumn.

The Russians are here desperately seeking an antidote and also here, not trusting them an inch are the Americans with rookie CIA field operative Elize Mahone. Her first live mission to assassinate the leading Russian surgical specialist using a troubled young man willing to die for their cause.

The Zombie horde are getting closer, the hit needs to be done before they can get on the last flight out but betrayal is the ruination of many a good plan and this one’s no different. Elize’s luck just ran out. This story doesn’t concentrate so much on the battle against the Zombies but more on the political games of the superpowers in the form of four people, two on the mission, one having second thoughts about killing himself and one unfortunate enough to be caught slap bang in the middle of it.

This was my first read from Adam Baker and I enjoyed it, the story gets interesting as Elize tries to fortify the mind of her kamikaze attacker and her mission partner discovers a double cross.