It’s time to go back to summer camp and the 1980s with Kill River by Cameron Roubique. It’s a familiar setting even for this English reviewer who’s never been to camp. There have been so many American slasher and comedy movies in that setting, it’s like a home away from home.

Cyndi is sent to Camp Kiwaba by her parents in an attempt to improve her social skills and to force her to disconnect from her Walkman. As a thirteen year old girl she’s horrified by the prospect, and it only adds insult to injury that she will be surrounded mostly by much younger kids.

In addition to Cyndi, the other major characters are her new summer camp friends, Stacy, Zack, and Brad, who are the only other teens around her age. Zack and Brad can’t stay out of trouble and are constantly hounded by a camp counsellor. The beginning of the book is setting up the camp routine and it’s a bit of a slow burn waiting for the horror to kick in. The foursome decides to defy the counsellors. They plan to sneak out in the middle of the night, escape the camp on a raft, find a road, and get back to town. However, things don’t go as planned. They get lost and stumble across a seemingly empty, but well kept, water park. They decide to explore and try some of the water rides in the park, only to discover they are not alone.

In the book you’ll find the fun camp stereotypes you expect and enjoy. The camp counsellor who’s a stickler for the rules, Sheehan known as She-Man, the power tripping female counsellor, Morgan, and the easy-breezy cooler counsellor. I kept expecting Angela from Sleepaway Camp to pop up at any moment. 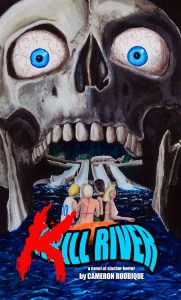 There are some nice touches (especially musically speaking) that set up the tension once the teens arrive at the park. The first kill we witness is in stark contrast to the subtlety of the story up to that point. It’s pretty shocking and will no doubt make you wince. The kills are well choreographed and in my head I could see slasher legend Jason Voorhees being proud of them.

A key to the success of a slasher is in creating a distinctive and memorable killer. Roubique does this, giving him a creepy smiley face mask and a definite menacing presence. We get a wonderful slasher game of cat and mouse as he pursues final girl Cyndi for the last part of the book.

I enjoyed the nostalgic camp slasher vibe. I really would have liked an increase in the body count. Hopefully we’ll see a sequel that can fulfil my blood-lust with some inventive kills of teen slasher-fodder. The 80s style slasher narrative is not the only thing about this book that’s a throwback. It’s only available in print, just like the good old days. What makes this concept worthwhile, aside from the story itself, is the fantastic cover. This is one you’ll want to have on your shelf.