We’re never too far from a film that aims to channel the soul-shaking, full-bore horror of The Evil Dead or indeed, one set in a cabin in the woods. Set in the woods of Wisconsin, James Crow’s Black Creek looks to be another one to throw on that pile, if this trailer and following synopsis are anything to go by.

“Mike and Heather’s father die and they go to his favourite spot to spread his ashes. A cabin in the secluded woods. They are joined by some friends as they go for what is supposed to be somewhat of a holiday. While there, a demon emits chaos by possessing the teens and they commit horrible acts. Welcome to Black Creek. The Hunting Season has begun.” 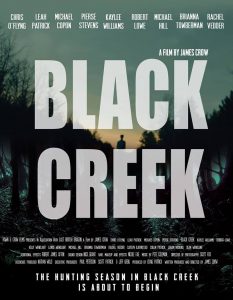 Crow – who previously directed Curse of the Witching Tree and House of Salem – wrote and directed the film, which stars a host of young newcomers including Chris O’Flyng, Leah Patrick and Brianna Shae, as well as Kaylee Williams (Model Hunger, Porkschop 3D) and former Power Ranger Michael Copon.

Black Creek comes from Last British Dragon and Sparrowhawk Pictures, and will be with us later in the year.