Kevin Williamson bringing Jack The Ripper to the small screen 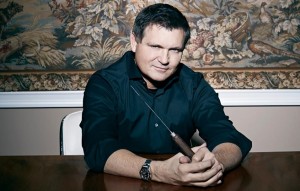 Dawson’s Creek aside, writer Kevin Williamson has seldom strayed too far from the horror genre. After making his mark and then some with Scream, he quickly became Hollywood’s go-to guy for smart, sassy horror scripts, penning I Know What You Did Last Summer, Scream 2 and The Faculty. He would also go on to write Wes Craven’s ill-fated Cursed. His TV creations include sinister dramas The Following and Stalker, as well as the pop horror of Demontown and The Vampire Diaries, and he’s about to add another to that list.

As reported by Deadline, Williamson is currently developing Time After Time for ABC, a sci-fi/horror/fantasy drama based on Karl Alexander’s novel of the same name, and the 1979 film adaptation. The story concerns futurist writer H.G. Wells, who pursues surgeon Dr. Stevenson to the 20th Century, after the Doc takes it upon himself to use Wells’ time machine. Initially unbeknownst to Wells, Dr. Stevenson is also known by another name: Jack the Ripper.

With Williamson currently writing the pilot episode, these are early days. IMDb has the show listed as starting in 2016 though, so hopefully it will land before the end of the year. We’ll keep you posted.