It’s not often the powers that be take it easy on Kevin Smith, but the MPAA have backtracked on their decision regarding the director’s latest, Yoga Hosers. Smith had been aiming firmly for a PG-13 rating with his follow-up to the opinion-splitting Tusk (for the record, I sit very much in the Tusk-is-awesome camp), but the ratings board initially slapped it with an R. Ready to fight the decision, Smith had an appeals hearing set, but it was cancelled; upon a second viewing, the MPAA agreed that a PG-13 certificate was suitable. 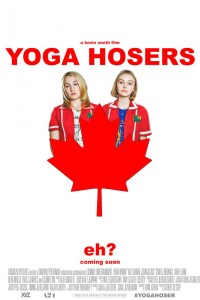 Smith has twice before appealed decisions made by the MPAA, when both Clerks and Zack and Miri Make a Porno received the box-office-killing NC-17 rating, which in both cases was changed to an R. This time however, no appeal was necessary; the board merely notified Smith of the change, with no explanation. It stands as one of many examples that suggest the MPAA (not unlike the BBFC here in the UK) are a little patchy when it comes to firm guidelines for certification, and that the mood of the day has just as much to do with a film’s given rating. Still, this is quite a turnaround, especially since no cuts to the film were ordered. Perhaps Smith’s proven willingness to fight such authorities (and come out on top) made the MPAA decide it simply wasn’t worth their time. Maybe a rogue examiner was having a bad day when the film was first viewed. Who knows? Either way, it’s good news for Smith, who could see his biggest box-office hit yet. The film does star a certain Mr. Johnny Depp, after all.

Yoga Hosers centres on two Yoga-lovin’ teenage besties who work at a convenience store. After being invited to a party that could seriously boost their social standing, the two accidently release a long-buried evil, and must team up with mysterious man hunter Guy LaPointe (Depp, reprising his Tusk role) to defeat it before the party.

A release date is – agonizingly – yet to show.