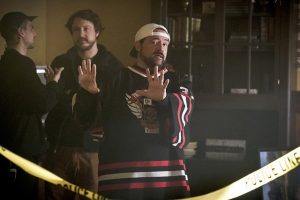 Kevin Smith announced last month that he has reworked his long-gestating horror anthology Comes the Krampus into KillRoy Was Here, which will feature a long-nosed antagonist inspired by the graffiti character popular in America during World War II. Talking on the latest Edumacation Podcast, the iconic filmmaker and co-writer Andy McElfresh shed some light on the character, whose monstrous visage was designed by legendary SFX artist and Wishmaster director Robert Kurtzman.

KillRoy, the pair explained, was a Vietnam soldier who, after returning home, was transformed into a monster and developed a rather unusual appetite.

“Dude just got lost, and the next time they find him he’s just sitting there, eating babies,” Smith explained with relish. McElfresh continued: “And he becomes transformed. Before he loses all of his humanity, they try to rehabilitate him, and instead that drives him out into the wilderness, where he’s transformed into this monster.”

“And he’s all melted in the face, that’s what creates the nose, the long nose effect,” Smith added, helpfully.

Filming is well underway in Sarasota, Florida, where Smith has employed the assistance of students of the Ringling College of Art and Design. Elsewhere, Smith is gearing up for production on Jay & Silent Bob Reboot, which is due to start filming in the autumn, and currently seeking funding for Moose Jaws, the final part of his True North trilogy.