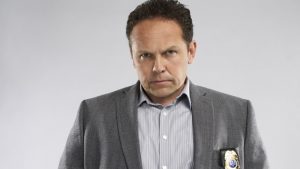 Kevin Chapman, who you may recognise from the series Person of Interest, has joined the cast of Slender Man. He is to play the role of Kevin Jensen, an emotionally-defeated and alcoholic husband/father. Sounds fun!

As you’d expect, Slender Man has been inspired by the chilling internet phenomenon of the same name and will follow the faceless being who stalks and murders his victims. Staying away from the woods will probably be the characters’ safest bet.

Sylvain White (Stomp the Yard, The Losers) will direct the film that additionally stars Joey King, Julia Goldani Telles, Jaz Sinclair, Alex Fitzalan and Oscar Wahlberg. The film will be released on 18th May 2018 and the script has been written by David Burke (13 Sins, Elle) and Victor Surge; the creator of Slender Man.