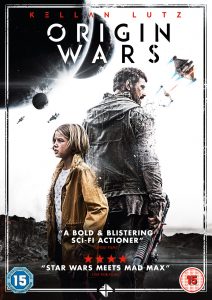 Embracing the candour and attitude of sci-fi successes of the ’70s and ’80s, Shane Abbess’ latest outing, Science Fiction Volume One: The Osiris Child grounds itself with profoundly layered post apocalyptic characters and relationships seldom seen today when it comes to big screen space operas.

Set in the future in a time of interplanetary colonisation, Kane (Daniel MacPherson), a lieutenant working for an off-world military contractor (EXOR) finds himself forced to flee in order to rescue his young daughter from an impending global crisis. Forming an unlikely alliance with a shady drifter, Sy (Kellan Lutz), the two find themselves up against both EXOR and the savage creatures that roam the barren planet – creatures that are a manifestation of the evil that lives inside all of us.

To celebrate this week’s release of the film in Australia, SCREAM sat down with Shane Abbess and Kellan Lutz to discuss the importance of shirking timeworn sci-fi formulae in favour of something much more character-driven and also provoking a vision of Lutz that we have never seen before… 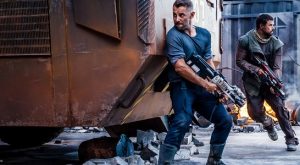 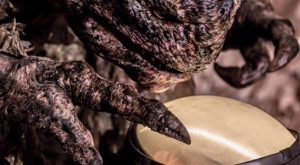 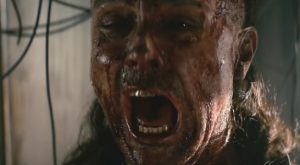 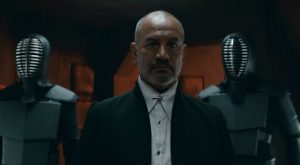 SCREAM: Coming straight off the back of your previous film, Infini, once again you’ve concocted another ’70s/’80s-tinged sci-fi actioner which is equal parts Aliens, Mad Max and The Running Man.

Shane Abbess: It came from a love of that depression era of the old science-fiction movies and the innocence or naivety that science-fiction used to have. I wanted to make a type of movie that I felt wasn’t getting made any more, if at all. I wanted to resurrect those kinds of pulpy, Saturday matinee type Betamax films I used to get from the video store when I was a kid. Aside from that, we wanted to do it in a narrative that wasn’t as conventional because there’s this huge formula going on right now. So myself and Brian [Cachia], who also wrote it, were really excited in doing it in a way like when we used to get comic books and then, within that, there were the themes of the Kane character (MacPherson), the hero who’s trying to go the distance and thinks he deserves to win the day and then the Sy character (Lutz) that’s lost everything who doesn’t really know his place or his purpose in all this but ends up being probably the most important character in there.

SCREAM: The story is a lot more character-driven than most sci-fi features of late and really navigates some tough and truly touching ground later on. Kellan, I’m guessing that was something that jumped out at you when the script reached your hands?

Kellan Lutz: For sure. I read probably five scripts a week and when I’d met with Shane on another project a few years ago called The 7th Day, it had all of those ingredients that I love. We weren’t able to make that movie yet but hopefully in the future we will. But a couple of years after we’d first met, he contacted me about The Osiris Child and I read it and I just fell in love with it. It was just such a unique story and I love that the chapters are out of synch and that you don’t really know the story arc for each character. It makes you think, “Is Kane the good guy? Is Sy the bad guy?” and the audience just can’t tell what the end of the film will actually be about. It’s kind of very Sixth Sense where you want to re-watch it again to see all the nuances.

SCREAM: Shane, you’d also worked with Daniel MacPherson previously on Infini. Did you write the parts specifically with the actors in mind or do you find that approach to be counterproductive?

SA: No. You kind of have a little rumble in the back of your brain as to who could be good for the roles. Once we’d finished the script, it was quite evident. Funnily, the characters were originally quite different. Sy was a little bit more of the dark horse and Kane was very much the opposite. It felt a bit too typical but then, once the boys were in their roles, it became obvious that both of them had a certain place in their lives that they could draw from. One of the things to do is to listen a lot to the performers to find where they’re coming at it from. I’m very much an internal cynic in terms of humanity and people and Kellan was the other way round. He is just this beautiful, charitable soul so we really wanted to bring that into the character of Sy so we see a lot of Kellan. Rather than extinguishing that light we thought it would work so much better if we let him play with that.

SCREAM: Kellan, what particular facets of your character did you feel needed accentuating so as to avoid, as Shane said, the traditional traits of sci-fi films we’ve seen so many times before?

KL: I think when Shane and I were sitting down to discuss his pitch for me to play Sy, which was such a win-win, I remember that he wanted to provoke a vision of me that no-one has really seen in things I’ve done before like Twilight or Hercules or The Expendables. I hadn’t really had the opportunity to layer it, to bring out the emotion, to bring depth to the character because it just wasn’t really called for. I really loved how much Shane really wanted to be the first director to really bring that out.

SA: When I’d met Kellan years before, I saw this incredibly soulful human being but then, in all the films I was seeing, it was all about the sex appeal and the body and the action and the stunts. I wanted to have the first film where people would talk about his performance and not about the body and the stunts. I really love that and I come from a place where it’s almost like trolling the movie. I thought about the negatives against me and the negatives against Kellan and I tried to work against that and it gives me great pride now when people come up to Kellan and tell him they think it’s the best work he’s done so far; not only for what my ambition was but for the fact that Kellan had the clarity and the determination to go all the way because it wasn’t easy.

SCREAM: How did you achieve such a blockbuster budget looking movie with the budget you had?

SA: Part of it was actually an immense compromise on the initial vision and being immensely flexible to finding a new one. So you begin to build the world you want and you know you’re going to have to make compromises with your budget. The compromises you have to make are huge and that’s where experience comes in because each day I would turn up on set at the location where we had planned to do it and certain parts of what we filmed would look like it was worth millions and millions of dollars and other parts would look quite cheap. That’s not the fault of anyone who was making the film; it was because of the budget constraints. So I would then redesign the film or the sequence or whatever we were doing to try and fit where it looked and felt great and that’s what I mean when I say you have to abandon some of your initial vision in a way. I must admit that I hit my head on this film. It was the first time I went to set and realised I was literally only going to get through this one by the skin of my fingernails because it was so big. It’s funny that I don’t have any more ambitions after this film weirdly enough. I’m not curious now about how to push a budget or how to bang for buck because I don’t have that curiosity. From hereon out, I think my films will be much better supported.

SCREAM: The creatures in the film look almost entirely practical. Was that a choice made based on your budget? Did your days working on The Dark Crystal 2 inspire the look of the creatures as they reminded me of my childhood nightmares after watching the original Dark Crystal movie?

SA: They were 100% practical so there were no CGI creatures in the film except for in a shot where there are multiple “Raggeds” in the same frame. Aside from that, we also tweaked their facial expressions a little bit in post to give them a little bit more life. We could only afford one animatronic head so when we had various creatures running together, they were all quite floppy and rubbery so we had to be very careful.

And then the Dark Crystal thing wasn’t really a conscious thing. It was actually more the shape of a human versus a creature, and because this is a longer story we’ve intersected this movie very early in the process so these terraformic killing machines are not quite what they want to be yet. But, having worked on The Dark Crystal, there probably was a shape I already liked in there but the final shape actually came out of safety. Originally, they never had that big hump and the neck was a lot longer but when we started to make them run, we would nearly kill the guys in the suits so that’s how we arrived at that place.

SA: Working with practical monsters must have helped you get into character in terms of knowing what you were up against, Kellan?

KL: Yeah, you always love practical over CG. Having the practical puppets there and seeing the actor, Dwaine Stevenson, in the costume and outside of it and really portraying the character non-stop really makes the monsters come to life more and more. It’s definitely my preference to have more practical over CG.

SA: Yeah. Dwaine put in weeks upon weeks of work in terms of form and movement and expressions.

SCREAM: This is Science Fiction One so I’m guessing you have a whole saga in mind.

SA: Yes. The story for Science Fiction Two is already done and we’re actually working on the script for that one already. We have the stories written for Two, Three, Four and Five so it’s definitely a saga and we want to exist in that mid-world where we’re not going to be Star Wars but we’re not going to be the little one. We’re going to keep the sci-fi fun going but we’ll probably do one every three or four years so that as we all get older, we’ll bring that experience to each one and jump a few years of the story. It’s just really exciting.

Science Fiction Volume One: The Osiris Child will open in Australian theatres this Thursday, 18 May. It will be available in the UK on Digital download on 17th July and UK DVD & Blu-ray 24th July. In the meanwhile, we’ll leave you with the latest trailer…