Iranian-born and raised in Los Angeles, writer/director Kasra Farahani cut his teeth as an industrial designer before stumbling into the world of film design, going on to work for many years as an art director and concept artist for a number of big studio productions such as Avatar and Guardians of the Galaxy Vol. 2. Following his debut feature The Good Neighbour, Farahani’s sophomore directorial feature, Tilt, hones in on the austerity of an unhinged protagonist’s seemingly mundane life to conjure up a character-driven, atmospheric chiller, brimming with disquietingly relatable dread.

Following the recent screenings of Tilt at this year’s TriBeCa Film Festival, SCREAM caught up with Farahani to discuss just how socially significant the film is as it serves up an all too familiar and distressing reminder of the “new norm” of white male rage and entitlement, making it one of the most prescient and chilling films of the year. 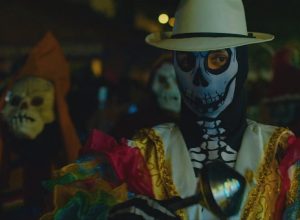 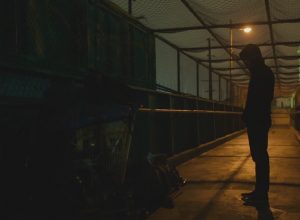 SCREAM: The story follows Joe, a clearly tormented soul who has a seriously hard time coming to terms with his shortcomings. Did a lot of the thoughts going through Joe’s mind come from a very personal place from both yourself and your co-writer Jason O’Leary.

Kasra Farahani: Absolutely. I think that it’s a modern struggle. If you live in a Western liberal democracy you’re basically living in a generation that is the beneficiary of a few generations before you that were very practical and hardworking and built up enough security that maybe you grew up in your own life feeling entitled to some sort of greatness or recognition. There’s a joke where if you grow up in L.A. or New York very often the only question is what kind of artist you are going to be. I think that what we’re seeing in this film is a common phenomenon as we see this guy’s clock run out. His time is up to chase his dreams. He’s having a child now and he has to be an adult. My parents got married and had children when they were 21 or 22 years old and that age is moving back and people are trying to see how long they can stall this before they have to become an adult. So we’re seeing this character wrestle with that and maybe he’s naturally vulnerable or unstable and he doesn’t take it very well.

SCREAM: Throughout the film there are various remarks about his job as a filmmaker not being a “proper” job. Is that something that you’ve experienced personally when you chose to work in the film industry?

You know what? That sort of thing isn’t all that autobiographical because I worked in the film industry for a long time as an art director and as a concept artist on large studio films. That’s how I paid for my life and I’m very lucky to work in something that I enjoy and it furnishes me the money and the flexibility to make a film from time to time. But I do have a lot of friends and I know a lot of people and I can certainly relate to the frustrations of this. There are a lot of people out there who have put their whole lives into becoming a novelist or a painter or a singer or a filmmaker. When that doesn’t work out, that process of having to admit that failure and trying to find a more balanced life that allows you to move forward in the other factors of your life that you put on hold to pursue this artistic goal is a difficult and inelegant process and it’s something I’ve seen a lot of first-hand.

SCREAM: I don’t know if this was intentional but Joe’s wife is a nurse in the film and although she is aware that something is seriously troubling Joe, she doesn’t give it anywhere near as much concern as she should. Was that an intentional critique about the state of mental healthcare or healthcare in general?

I’m not by any means educated about mental health so I wasn’t trying to make anything explicitly pointed in terms of an observation about that. But I do think there’s an element of Joanne where she does miss the severity of what’s going on. There’s even a moment in the film where Joe tries to warn her that he doesn’t feel safe to be around and Joanne misses that. Maybe she missed it because she was tired after a long day of work but maybe she missed it because all of us have invested an interest in tranquillity and we don’t want a big disruption in our life so I think our capacity for denial or for not seeing troubles in our families or in our lives is pretty high actually.

SCREAM: Talking of that moment where he tells his wife he’s scared of who he is becoming, I imagine it was a very complex task to find just the right balance for Joe because he is clearly losing control, but at the same time, he is fully aware of just how dangerous but also just how impotent he is.

That was incredibly difficult for us. When writing this, we had to be very, very careful with the pacing of this slipping mask of this person. At first, we see Joe testing himself. He’s standing over his life and testing himself to see if he can have the courage to destroy this life that hasn’t turned out the way that he wants. And then, midway through the film, there’s a reveal (that we won’t go into) that maybe he’s already begun this process. But it was tricky to piece it all out in a way that made him feel normal but at the same time troubled until you finally realise just how serious it really is.

SCREAM: So what did you see in Joseph Cross that suited the role of Joe, this filmmaker who loses his grasp on reality as he wrestles to keep his dreams afloat?

I was actually introduced to Jo for something completely unrelated. I was familiar with his work and he is an incredibly talented and nuanced actor. There were some things about him in terms of his age and the fact he was a Caucasian, handsome male with a kind face that were very relevant for me because this idea of a killer that we have in popular culture is so silly so often. It’s often a Muslim terrorist or a masked man with a machete, but in actuality the real horror comes from people that look just like us, are probably all around us and we all probably know one or two of them. Sometimes they’re pretty kind and maybe they’re somebody that you think you’d be most comfortable with. So, between Jo’s acting and the way he presents, he was perfect and I sent him the script and I spent a few weeks convincing him to do it. In all honesty, he was very uneasy because of how dark the film is but he did it in the end and I’m so grateful that he did because he’s so good.

SCREAM: Was there a specific reason why you wanted Joe to be piecing together footage of “The Golden Age” for this documentary that he is editing together within the film?

We were writing this in the middle of the primary season and there were nineteen or so Republican candidates at the time. Trump’s “Make America Great Again” was pretty loud at that time and here, as an Iranian-born American, you can’t help but be impacted by this idea of “Make America Great Again” that is maybe coded language for “Make America White Again” or “Make America Christian Again” or “Make America Male Again.” So the fixation with “The Golden Age” came from the idea that a lot of people will say that there is this myth of this amazing time when everything was perfect and everyone was happy and had money. There is a lot of this because of a lot of artificial reasons. In post World War II, America was completely insulated and was undamaged in the war and it had this infrastructure that was built up to make war machinery so there was a very successful, healthy and vibrant manufacturing economy when the rest of the world was completely bombed. This resulted in a brief prosperous time but even then that prosperity was really reserved for white males. The civil rights movement happened at that time and a lot of smaller parties did benefit from that prosperity so it was like the golden age if you were a white male. So there’s definitely some of that in what Joe was working on and I think that while he’s outwardly illiberal and he’s outwardly indignant about Trump in these things, as an unemployed male whose wife is pregnant, maybe he feels a little bit emasculated. Maybe deep down he wouldn’t mind living in “The Golden Age.”

SCREAM: Having dabbled in the world of documentaries to create Tilt, can you see yourself filming a documentary any time soon?

It’s definitely something that I’m interested in but I don’t have any plans to do that. I’m definitely more interested in the broader questions you can ask in scripted material. So, for the moment, that’s my focus. I’ve got a couple of scripts that are out in the world. I wish there was a little bit more I could talk about on them. We’re trying to put them together, but of course, all of that’s very difficult in the independent film world. And then there are a couple of other things that Jason and I have started talking about writing. Believe it or not, one is a science fiction film whilst the other is a children’s fantasy film. One of the other difficulties is that people want to make only one kind of film but sometimes your best ideas or the ones that you’re most passionate about just happen to be in a different realm and that’s what you end up pursuing… 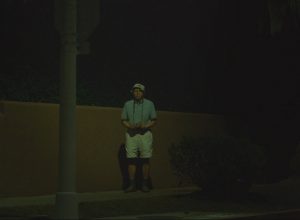 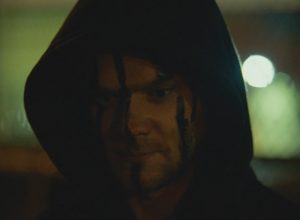 We’d like to thanks Kasra Farahani for speaking with SCREAM and we’ll leave you with the teaser trailer for Tilt that was revealed just prior to TriBeCa.