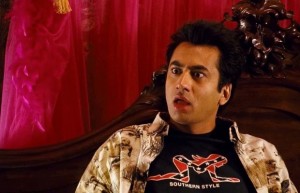 Instead of going to whitecastle, Kumar is going into the world of photography and serial killers as Kal Penn is cast in The Girl In The Photographs.

Penn will star as hipster Peter Hemmings, the angel in disguise who offers protagonist Colleen a chance to escape from being tormented by a pair of serial killers.

The Girl In The Photographs is being executive produced by Wes Craven (A Nightmare On Elm Street) alongside Al-Ghanim Entertainment. It will be directed by Craven’s protégé Nick Simon (The Pyramid), who will also write the script with Oz Perkins (Star Trek) and Robert Morast.

Cinematographer Dean Cundey, who filmed the original Halloween films, will return to the horror genre as he films this enticing story.

Production of the film will begin this month in Canada.

Synopsis:
Colleen is fed up with life working in a grocery shop and putting up with her abusive boyfriend. As she distances herself from her old life, she is tormented by two twisted serial killers who leave her photographs of their disfigured victims. Peter Hemmings, a hipster celebrity photographer, comes to her help in the form of a campaign ad, but her tormentors aren’t going to let her forget.