Godzilla may be returning to terrorize Japanese shores in July, but the King of the Monsters won’t be the only one stomping cities in the Land of The Rising Sun, as that month also sees the release of Daikaiju Mono (that’s Giant Monster Mono to us English-speakers).

Really, this poster should tell you all you need to know about the nutbags monster movie in which a famous wrestler is supersized to take on the titular threat, but feast your eyes on the utter batshit excess of this first trailer. There’re neither subtitles nor subtleties but honestly, you’ll be fine without either.

Giant monster MONO appears from deep under the ground and starts preying on humans. As the man-eating monster terrorizes the city, a scientist changes a human into a giant Titan in order to battle against MONO. A fierce battle between kaiju MONO and Titan begins. 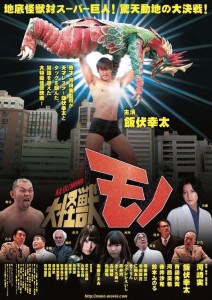 Japanese directors seem to be in a constant fight to out-crazy each other with their modern B-movies but on this front, Mono helmer Minoru Kawasaki is hard to beat. His gonzo directorial resume includes titles such as The Calamari Wrestler, Executive Koala and The Monster X Strikes Back: Attack The G8 Summit, all of which are more or less exactly how they sound.

Check out the trailer below; it’ll be the weirdest 90 seconds of your day.