A Kaiju and a one-eyed samurai fighting in Edo Period Japan? Ah, go on then. A Japanese trailer has just made its way online for Koujin, which sees a huge, monstrous lizard descend on a small village for some destruction and light snacking. Check the trailer out below; it’s kind of amazing.

Koujin was directed by Zennosuke Matsuura, and stars Yuki Uchida, Takehiro Hira, Yuta Hiraoka, Shingo Yanagisawa and Yasuo Daichi. It is supposedly based on a novel by contemporary Japanese author Miyabe Miyuki. 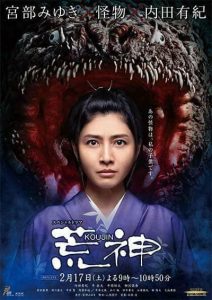 Synopsis:
The story takes place in 1700’s Northern Japan after the war. A boy, after getting attacked by some strange monster, escapes to the nearby village where Ayane lives and warns the villagers that the monster is approaching. The village residents start trying to find a way to protect their village. Meanwhile, Ayane’s brother has a conspiracy to control the monster and use it. As the story goes on, we find out exactly how the monster was created and the cruelty some humans are capable of.

We eagerly await further details and hopefully, news of an international release.