K IS FOR KLUTZ: Book Review 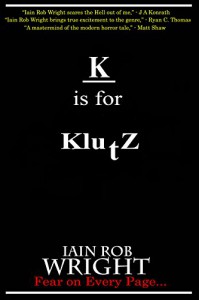 Iain Rob Wright is hammering his way through the alphabet with a short tale of horror for every letter, not sure if he’s already done this but he should run a competition and let some of the readers pick a title for him. My votes N for Nail gun or S for Scythe, this will keep me good for twenty minutes. What about N is for Nunchucks, hang on these are all potential weapons, that’s a worrying thought pattern better stop now.

Next up is K and K is for Klutz, I always thought a Klutz was a clumsy idiot or a bumbling fool but not in this prosopopoeia, no a Klutz is a blood curse and David for his sins is the recipient. Whomever David comes into contact with, dies pretty much straight away and generally by some sort of bizarre accident. His family, everybody and he can’t even kill himself to escape the curse. Death follows him relentlessly and there’s no escape until a doctor tries to help him.