Snippets of news continue to filter in about David Gordon Green’s upcoming Halloween film. We learned recently that in addition to Jamie Lee Curtis reprising her role as Laurie Strode, Judy Greer (Dan of the Planet of the Apes, Jurassic World) will also appear, as Laurie’s daughter Karen. 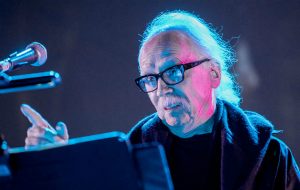 While John Carpenter will executive produce and has been instrumental in the film’s development, we still have no confirmation as to whether the horror master will provide the soundtrack, as has long been rumoured. Talking recently to Stereo Gum, Carpenter was asked just this, and replied: “Sure. I’d like to do it,” adding, “I’ve worked with them a little bit on the script. I’m just around to be a cheerleader for everybody.”

Carpenter was also asked if he had a hand in Curtis returning, and in replying, revealed that the new film directly follows his landmark 1978 original.

“No. She talked to the director,” he said of Curtis’ hiring. “Her part was written into the script and they had this idea — it’s kind of a… I don’t know how to describe it. It’s almost an alternative reality. It picks up after the first one and it pretends that none of the other [sequels] were made. It’s gonna be fun. There’s a really talented director and it was well-written. I’m impressed.”