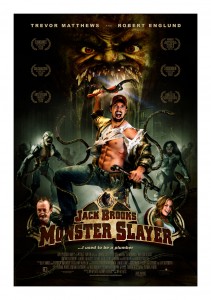 If you share the same penchant as me for outrageously over-the-top low budget horror comedies then I’m certain you are just as partial to 2007’s Jack Brooks: Monster Slayer as I am. Directed by the then first-time feature director Jon Knautz and penned by John Ainslie, Jack Brooks was brimming with razor-sharp funnies, madcap monsters and a scene-stealing performance by none other than Robert Englund.

In celebration of the film’s popularity, the recently established Slamdance Cinema Club will be resuscitating Jack Brooks by bringing him back to the big screen followed by a Q&A with Trevor Matthews (producer/actor), Patrick White (producer), John Ainslie (writer), Ryan Shore (composer), Stephanie Drummond (actress) and possibly more to be announced soon. In anticipation of the impending revival screening SCREAM’s Howard Gorman caught up with John Ainslie to reminisce about his first screenplay and to squeeze out as much info as possible regarding his imminent outing as a first-time director…

SCREAM: So Jack Brooks: Monster Slayer is being revived on the big screen. Where will the revival be and how did the opportunity to screen it again come about?

John Ainslie: The revival screening will take place on November 8th at the ArcLight Cinema in Hollywood as part of the Slamdance Cinema Club. Each month, the Slamdance Cinema Club will select new independent films from the 2015 Slamdance Film Festival to be screened at ArcLight Hollywood followed by a filmmaker Q&A, with high-profile surprise guests and moderators. We’re really excited to be taking part in this with these two great organisations.

SCREAM: The film was both yours and Jon Knautz’ first feature film project. How did you both cross paths and end up working together on this?

JA: I met Jon while he was at the Vancouver Film School with producer Patrick White. Pat and I started making films together back in Windsor Ontario. Jon and Pat made a short together at VFS and then they ended up in Ottawa where they started Brookstreet together with Trevor. After a couple short films they wanted to do a feature. I had written a little short for Trevor and we both enjoyed the process so thankfully they asked me if I was interested in writing Jack Brooks with them.

SCREAM: Where did the original idea behind Jack Brooks stem from? Was it always intended to be so whacky from the word go?

JA: The first draft wasn’t whacky at all. It was actually a pretty straight forward horror. The guys knew that Trevor was to star in it and they had a school location. Trevor had this crazy idea of black heart that was pure evil and Jon had two requests; he wanted to shoot tentacles practically and he had a shot of a girl being dragged down a hallway and slamming her face off a locker. That shot is in the film pretty much exactly as he described it to me when we were outlining the film. We had a first draft we were really happy with, but it wasn’t a “special” film. We all figured we may only get one chance to make a movie so we decided to go for it and get as big as we possibly could and Jon brought in the idea of making it comedic which really freed us up creatively to go anywhere.

SCREAM: What would you say were your main influences? Jon Knautz has cited things like Gremlins, The Fly, Evil Dead and Big Trouble in Little China.

JA: Obviously The Fly was a big influence, but I also drew a lot of Jack’s character from Batman, the idea of a child losing his parents at a young age and left with a burning rage he learns to channel in a positive way. For the Professor I re-watched all the Re-Animator series. I liked the idea of this guy who’s obsessed and has no social graces. Then for the transformation I really drew from Vincent D’Onofrio’s underrated and hilarious performance in Men in Black.

SCREAM: Can you describe how you took the monsters from page to screen? Did you work very closely with David Scott to get things exactly the way you intended?

JA: I didn’t meet David Scott until FanExpo after the film was already out. Jon worked with him on set and created some amazing monsters for the film. Jon and I spent long hours talking about the mechanics and logic behind how the professor infects the students and then in the end we just said “Fuck it! What would look really freaky?”

SCREAM: Was it a challenge to come up with a monster movie that had no intention of going down the CGI route? Were you concerned that the monsters would not look as good as they ultimately did in the end?

JA: Going the CGI route was never really an option for us, so I don’t think we really thought about it too much and when the film was made CGI monsters weren’t really that great at our budget level. A lot of making it slapstick came from that desire to “get away” with things. If the viewer is laughing and along for the ride they’ll forgive more. For me, as amazing as CGI has become, there’s still a part of the human brain that knows it isn’t real, that it isn’t actually there. Whereas a rubber suit or a puppet still has a person behind it bringing personality and performance to it. That shines through somehow.

SCREAM: Tell me about the lead, Trevor Matthews, also producer. What was it about him that made him the perfect Jack? What traits did you have in mind when creating the script? 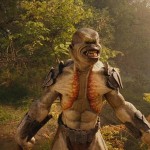 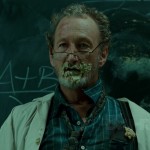 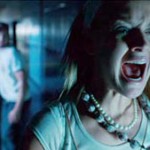 JA: Trev was always going to be Jack so I wrote with him in mind and then he and Jon refined the role together.

SCREAM: Did you always have Robert Englund in mind and specifically to use him in a role that was very much the opposite of “Hey, I’m that guy who played Freddy”?

JA: I never imagined Robert Englund would even read my script, much less act in the film!

SCREAM: The film suggests that a franchise was in mind? Will we ever see something come to fruition?

JA: I have a couple ideas about a sequel and I think Jon and Trev had worked one out at one point, but nothing has ever come of it. I’d be happy to work on one, I think there’s a lot I could do with that character.

SCREAM: Are you still in contact with Jon Knautz and have you considered working together again on a sequel or other project?

JA: Jon and I keep in touch from time to time. We try to support each other by tweeting news about our current features “Goddess of Love” and “The Sublet”, spreading word or making an introduction. We actually had quite a few of the same people working on post for both our films; we both did sound at Urban Post in Toronto and had Keith Elliot and Rudy Michael, who are some of the best mixers in the country and Mark Dejczak worked as Sound Editor on both our films. And the talented A.J. McLaughlin at RedLab Digital did an amazing job colouring both our films.

SCREAM: You have a new film coming out which you directed called The Sublet. Can you break that down a little for SCREAM readers? What can we expect?

JA: The Sublet is my feature directorial debut. It’s a suspense driven psychological-thriller about Joanna, a new mom struggling with postpartum depression while coping with her baby alone in an odd sublet apartment. Left alone as her husband neglects her for his career, she discovers that the apartment has a violent past and she clings to her sanity as the apartment’s blood-soaked past leaks into the present.

It stars Tianna Nori from The Demolisher and was produced by Black Fawn Films in association with Breakthrough Entertainment and is set to have its North American premiere at Whistler Film Festival and European premiere at Razor Reel. I’m super excited to see how it’s received.

We’d like to thank John for talking to SCREAM and you can find out all details of the screening here.

In the meantime we’ll leave you with the trailer for Jack Brooks: Monster Slayer and watch this space for impending information regarding The Sublet…