Jim Rothman’s SCYTHE To Be Made Into A Feature

Award winning writer/director Jim Rothman (I’m Not Matt Damon, Going Down There, Minutes) has an active Kickstarter campaign to turn his successful slasher short film SCYTHE into a feature. The campaign ends on Thursday May 5th at 7AM. Currently, they are 41% funded. Prizes range from Blu-Ray copies of the film, rare promotional art, producer credits, and the ability to place your own personal prop in the film. The link to the Kickstarter campaign is: SupportScythe.com

The feature film SCYTHE will be an independent psychological slasher/thriller in the spirit of HALLOWEEN, SAW & films directed by the great Alfred Hitchcock. The main difference: No Slasher Film Cliches.

Jim’s film will modernize the slasher genre and have a human-interest, dramatic element that takes

the time to focus on developing three dimensional characters that “actually have lives, that we actually care about.” It will avoid the annoying slasher film cliques the slasher genre is known for. The film is suspense-based, intensity-based, fear-based, not gore-based, but of course “there will be blood”.

Jim and his team have already raised the first $50,000. The success of the Kickstarter campaign will allow them to shoot the feature film in late Sept/early October. 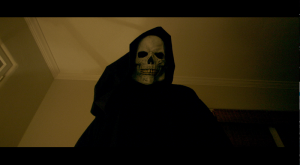 You can check out the SCYTHE short below: