Jim Mickle to Direct Pilot of ‘Sweet Tooth’ for Hulu 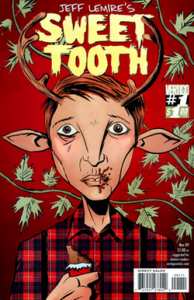 Jim Mickle (Stake Land, We Are What We Are) is to direct the pilot episode of Sweet Tooth for Hulu. If all goes well, the series will be an adaptation of the comic series of the same name, which has been described as Mad Max meets Bambi.

The comic comes from writer and artist Jeff Lemire and was published by DC Comics’ Vertigo imprint between 2009-2013. The story is set in a rural post-apocalyptic world where some creatures are hybrids of humans and animals. A boy/deer hybrid called Gus – who’s a boy with antlers – is at the centre of the story and along with other hybrids, he searches to find the reason behind a recent cataclysmic event.

The series will be executive produced by Warner Bros. Television and Team Downey. Jim Mickle will also write the pilot episode.