Jigsaw Returns in the First Poster for Saw 8

The eighth Saw film “Jigsaw” has received its first poster and it urges you to Become Jigsaw. No, thanks! 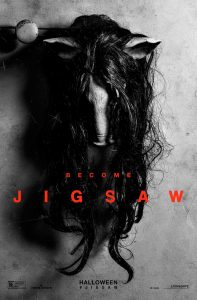 It’s a very creepy poster that marks the return of Jigsaw with the ominous portrait of one of his (and his minions’) iconic pig masks.

Jigsaw will be directed by Michael and Peter Spierig (Daybreakers) with a script written by Piranha 3D and Sorority Row scribes Pete Goldfinger and Josh Stolberg. James Wan and Leigh Whannell were also involved in the script process, so that bodes well for the new story.

It’s been 7 years since the supposed “Final Chapter” of the Saw franchise, but we’re glad to see the films are continuing. Considering the epic $870 million the films have grossed at the box office, it’s no wonder that Lionsgate is hesitant to let the franchise die a death. Not yet, anyway.

Tobin Bell will be having an autograph signing at the upcoming San Diego Comic-Con, so we’re hoping to see a trailer tease in time for the convention, which runs from 20th-23rd July 2017.

Jigsaw will be unleashed on 20th October; back in it’s rightful Halloween spot. Excellent.