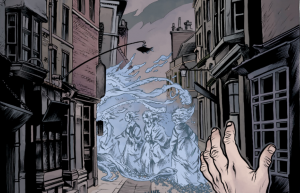 Victorian England has always had the uncanny ability to capture the writer’s imagination. Whether its love or murder, much of it can be traced back to that fantastic gaslight era of top hats and carriages. Jenny Finn, on the other hand, has managed to inspire both. Originally released in 2011 by Mike Mignola and artist Troy Nixey, Jenny Finn tells a Victorian era story of a girl who is not quite as human as she appears. Thanks to Dark Horse, this once forgotten comic has once again been recollected and retouched with full-colour pages! This is not a continuation of the Hellboy universe either, but a stand-alone work that caters to fans of both old Gothic novels and Lovecraft. Lots of winding streets and blood frenzy at the gallows for this one, that’s for sure.

The comic starts off like the shriek of a paper boy selling front page murder by literally doing just that. As fisherman poke and prod their ugly catches of the day and the hookers warm up the laps of passing johns, the tabloids blare their headlines to those lucky enough to be able to read: Slasher Strikes Again! It seems that the streets of old London are haunted by a masked murderer who targets prostitutes, but for once, the prostitutes have bigger problems on their hands. The johns coming in are starting to carry a terrifying new disease that transforms the body into a mass of sea creatures’ limbs. As word spreads about the plague, our protagonist Joe enters the picture, who immediately starts following a small girl around the back alleys for fear of her getting hurt. But it seems like the girls reputation far proceeds her and as she makes her way through the streets, her name, Jenny Finn, is spread in whispers among the destitute. When a crazed man makes an attempt to kill her, Joe suddenly realises that he’s in over his head, but as he goes further into the lost maze of the city, dark secrets and forgotten people begin to spill into the streets. Who is Jenny Finn and how’s she connected to all the chaos in the city?

Jenny Finn is a surprisingly busy comic for basically being a wolf-in-sheep’s clothing story. The work starts off with two mysteries, the disease and the murders, seemingly unrelated to each other. As the story progresses, both seem to start intertwining with the murders picking up speed as the disease spreads rapidly across the streets. Suddenly, we get a third query, the mysterious Jenny Finn, who takes Joe deeper and deeper into a world that he doesn’t understand and constantly makes the reader wonder how one girl can seemingly cause so much chaos among the citizens. Mignola manages to write a classic weird tale, where a wrong turn and the wrong person can take a simple man and put him into a world that lies just beyond his periphery. Even the citizens that Joe comes across are quick to madness and frenzy, giving the work a subtext of mass delusion similar to real life examples of holy rollers or the dancing frenzy caused by bad bread. Despite the several different plots, the comic never becomes disorganised or overwhelming, but carefully walks the line of intentional confusion. You never really know what happens in this issue and you’re not supposed to know, not yet anyway. Of course, if you’ve read the initial 2011 release, you know exactly what’s coming, so don’t spoil it for the rest of us! 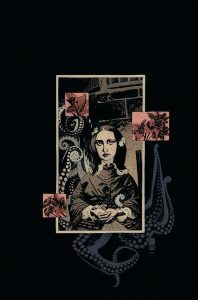 As usual, Mignola’s writing is easy flowing, filled to the brim with the supernatural, and has a relatable guide character to help the reader navigate through mysterious worlds. Rarely drawing anymore, the art has been delegated to long time illustrator Troy Nixey, this being his second collaboration with Mignola after the Batman story, The Doom that Came to Gotham. His art style is very sixties horror inspired, a time where horror comic art was breaking away from standard comic form and exploring more cartoonish illustration. That’s not to say his work is overtly cartoonish, but it’s much more expressive and character individualised than its predecessor. Everyone looks a little sad and a little dumpy, which makes sense given the time and place, and the creatures are very surreal and detailed. You can practically poke the little squid arms if you so choose. He’s a very talented artist.

If wish to pick up the first issue and read this madness for yourself, the Jenny Finn #1 will be out November 15!